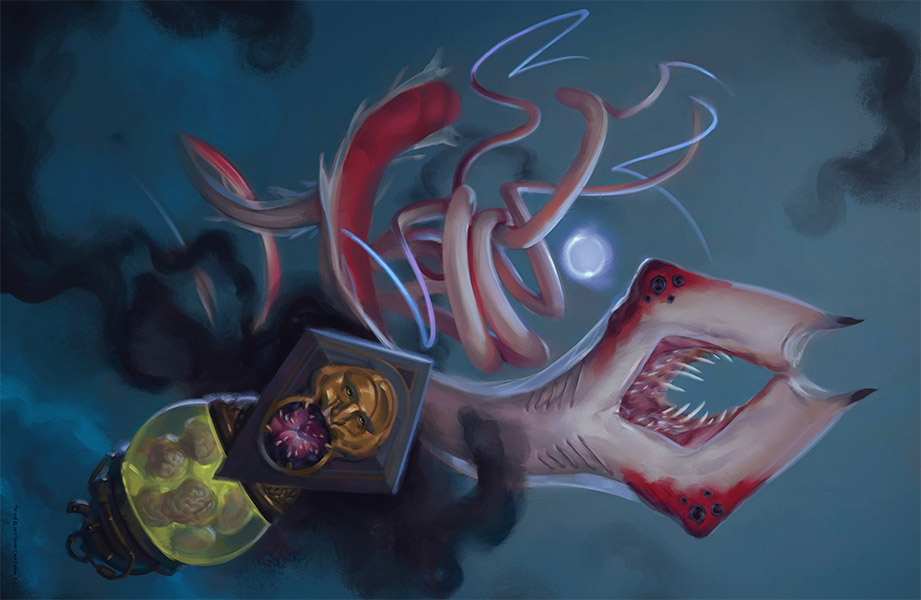 Watching The Raven Wants What You Have is a great way to prepare for your upcoming Invisible Sun campaign. If you aren’t an Invisible Sun Kickstarter backer and you’ve not yet preordered it, there’s still a small amount of time to preorder it through the MCG Shop, thus securing a copy for yourself (quantities are going to be limited!)!

Are you watching Echoes Linger, our livestreamed Numenera campaign? Darcy is the GM and the players are Monte, Shanna, Bruce, Sean, and you! That’s right, we need you to tune in on Tuesdays at 5 p.m. PDT and make suggestions during the show.

In episode 2, the castouts reach the city of Bodrov, searching for a nano cartographer who can help them, but instead they find an old friend, a challenge, and a mystery. This episode features a fan-created spot called Gazrava! Plus more gems like the Numenera Tide Pod Challenge above.

Guess what? I'm in Season 2 of #StarterKit! Ep.1 airs 4/19 on @JoinTeamAlpha (https://t.co/pNWwiMVjz9). Watch as we learn #Numenera from #RPG legend @MonteCookGames! Thanks to @davidnett and all my friends at @GeekandSundry for having me on. #RPGNo3 https://t.co/POSHaQ01pc
— Jeremy Walker (@JWalkerScene) April 5, 2018

Bruce was recently on Penny Arcade’s Acquisitions Intoxicated (the fun starts at the 14-minute mark), talking about beer, games, and a bit of everything, really.

You don’t have to journey into Storia to find a tiny T. Rex–they’ve just dug up one in Montana. (It’s not actually that tiny. But still.)

These photos of an amazing dynamic sculpture by Johnson Tsang include work-in-progress shots, which are perfect inspiration for players whose characters are artisans.

I can imagine encountering a guardian descendant of the BionicWheelBot (video below) in a prior world ruin while searching for numenera, can’t you? Just speed up and smooth out the movement a bit, increase the overall size, and add a cool weapon.

The Ninth World Bestiary is lavishly illustrated and wildly imaginative, featuring more than 130 creatures and characters. If it isn’t part of your Ninth World collection, you are missing out on loads of beastly beasts, carnal creatures, and cunning characters. There also GM advice on using pre-made creatures or creating your own. And–my favorite–a beautiful centerfold spread of size comparisons for all the creatures!