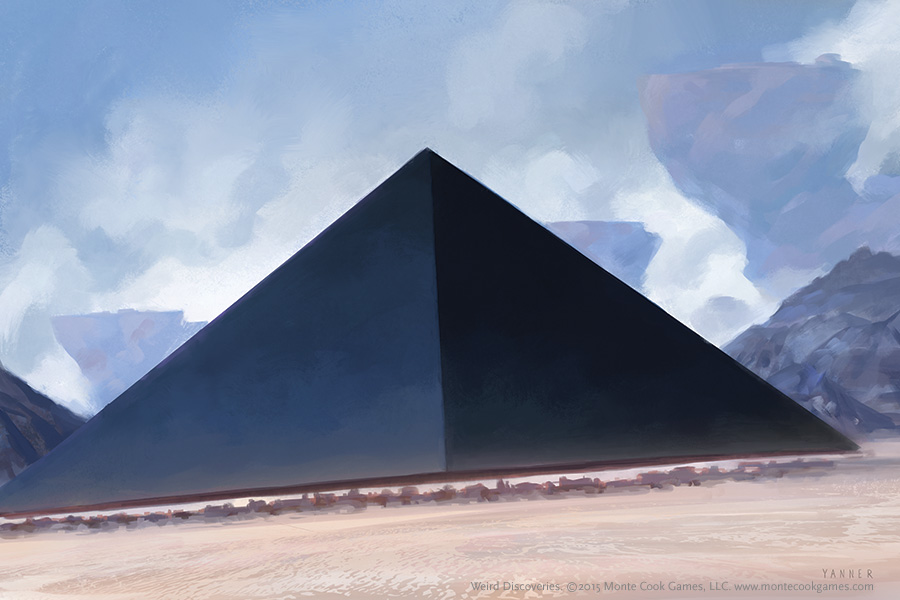 This is a guest post by Jeremy Land. Jeremy is a member of the MCG editorial board.

On March 20-22, about a dozen Cypher System fans from Wisconsin, Illinois, Massachusetts, and Michigan gathered in Grand Rapids, Michigan, to get a mid-season gaming convention fix before Gen Con 2015. We played many games: a Fate Accelerated Star Trek-style romp; a Wisconsin-centered Call of Cthulhu rescue mission; the first mission of new agents of the Estate, set in a New York insane asylum; a Numenera- (and somehow Victorian England-) themed game of Fiasco; a horror-themed exploration of the Grand Bavarian Hotel; a Microscope examination of one of Numenera’s prior worlds (with insectoid rulers, flying purple ponies, and unknowable entities of destruction from beyond our own dimension); and countless card and board games to fill the time between and give folks a chance to rejuvenate themselves before the next RPG.

I also ran an adventure from the free preview of Weird Discoveries, Beneath the Pyramid. I wanted it to be a “pure” experience–meaning, I wanted to see if it lived up to the promise working well with just 5 to 10 minutes of prep. So I didn’t read it ahead of time (although I did have the pregenerated characters’ cypher cards pulled out of the deck and attached to the correct characters). My players made use of my box of poker chips to track their stat Pools (red for Might, green for Speed, white for Intellect, black for XP), which, later on, made it easy for me to see when the group was getting beat up and recommend making some recovery rolls. 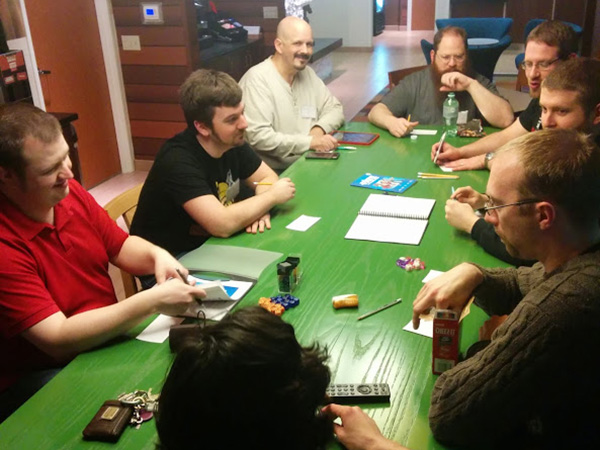 There was a bit of a challenge in running this adventure (and its companion for the other half of our group, The Hum): We returned to the game store, Out of the Box in Kentwood, Michigan, after getting dinner at Founders Brewing Company with only about 2.5 hours before closing. So I pulled out the pre-gens and passed them around to my four players. While they read over their characters, I designated one of the veteran Numenera players to answer any questions about abilities, cyphers, and rules, while I perused the adventure for the very first time.

There is an interesting structure to Weird Discoveries. Each adventure provides the GM with some background paragraphs, a bulleted list of the salient points, and a couple of starting point paragraphs. From there, the whole thing takes place on a map, spread over two pages, with arrows leading to specific areas from the text describing those areas (and some suggested GM intrusions!). There may also be arrows leading from a block of text to one or more other blocks of text, indicating that the players can move about the adventure along one of several potential paths. Because of this setup, a GM can read ahead only to the next couple possible locations, which lets the game get started sooner and keeps it moving once it’s in progress.

Now, an interesting bit about the Weird Discoveries adventures: They are customizable, to a degree. So if the players need three bits to advance the plot to the end, the included map will denote many places where each of those keys could appear, and the GM can decide either ahead of time or, as in my case, when it feels right, where those keys show up. And if you don’t have a key in one of the suggested spots, you can roll up (or draw from your handy Cypher Deck) some cyphers to fill the gap.

Each adventure can be placed wherever the GM wishes, but each also has a suggested placement on the world map (Beneath the Pyramid lies on the border between Matheunis and the Pytharon Empire). Knowing this, I opened my Maps of the Ninth World glimmer on my tablet and zoomed in on where everything would take place. If you have more time, you can brush up on the history and interesting locations near where the adventure occurs to give your players more context about the world around them, which is easy enough thanks to the ever-present corebook callouts in the margins.

Now, onto the meat of the game!

(The next three paragraphs contain spoilers!)

The way the adventure is written allows for either a shorter game that starts right in the action, or a longer game where players play out more of the first act. Since we had limited time, I monologued the background and started them right in the action, with an ambush by abhumans. This provided lots of opportunity to familiarize the newer players with the Effort, Edge, and assorted ability mechanics.

Once the group resolved the initial encounter and decided it was unrelated to the task at hand, they went on to explore the abandoned “city” beneath the pyramid, where I had a grand time screeching out lunatic phrases by a madwoman, hurtling the characters through walls with a telekinetic lizard, and sublimating a metal pillar holding a key. It’s worth noting that the players didn’t explore all of the city before moving to the next phase of the adventure, so having the keys in flexible places allowed me to move the game along and stay within our timeframe without waiting for the characters to discover every nook and cranny of the city.

It took some doing, but my players (with the help of a GM intrusion) found their way into the pyramid floating above the city and into the end of the adventure, with about 15 minutes to spare before closing time. The adventure could end there, but there’s a whole pyramid to explore, which is the subject of the next adventure in Weird Discoveries, Inside the Pyramid.

(That’s the end of the spoilers.)

Everybody enjoyed themselves immensely, and I had lots of fun messing with them with the assortment of NPCs and oddities they discovered along the way.

As a stand-alone product, Weird Discoveries does well what Monte set out to accomplish: The new adventure format allows a GM to get a game up and running in 5-15 minutes. It was flexible, too–I could have run a four- or five-hour session, but was easily able to keep it under three hours when my time was constrained. And this product will positively glow with potential if you pair it with Injecting the Weird, Taking the Narrative by the Tail, and the Cypher Decks! 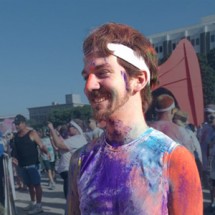 Jeremy Land has been a gamer for 17 years, starting with AD&D 2nd Edition at a lunchroom table in middle school. He’s on the Monte Cook Games Editorial Board. He works for Lone Wolf Development, creators of Realm Works, Hero Lab, and Army Builder. His background includes working and being trained as a firefighter in Yellowstone National Park, as well as working on the editorial staff of a newspaper publishing company. As a Boy Scout, he spent a week backpacking on Isle Royale National Park. He is now married and living in Southwest Michigan.