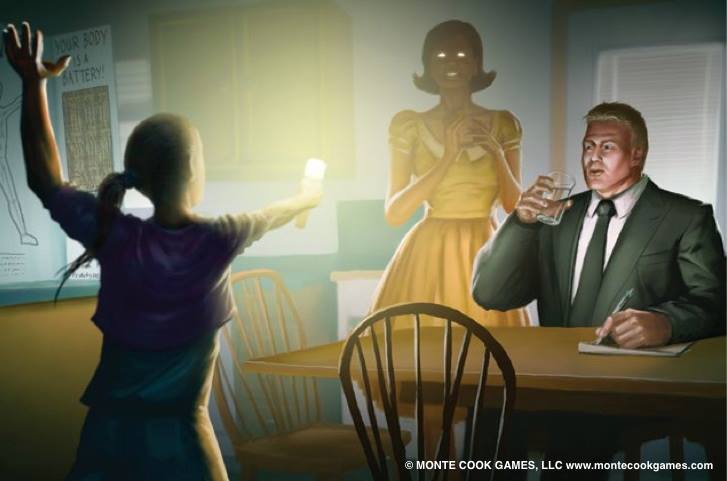 Enjoy this mini-adventure for The Strange excerpted from The Dark Spiral. If you like it, keep playing by picking up the entire adventure: The Dark Spiral is 33% off for only 4 more days at DriveThruRPG!

Estate Chief of Public Relations Liza Banks assembles teams to hand out Morrison Fellowship Prizes (see the Estate Foundation online). The prizes go to people working in any field who “demonstrate remarkable talent and the promise for continued creative work.” However, the real reason the Estate gives out these prizes is so they can keep tabs on technical advances that might be due to effects of the Strange.

Liza tells one or more PCs (Estate operatives or contractors) that they’ve been selected to accompany her on a mission to Faribault, Minnesota, to award a prize to one Gwendolyn Wertz for her winning entry in the state science fair: how the heat of the human body can be used to power smartphones and other household objects. The Estate wants to make sure that Wertz or her advisor hasn’t stumbled onto some sort of cypher or artifact from a recursion.

Faribault, Minnesota: Faribault is the county seat for Rice County, Minnesota. It has a population of approximately 23,000 people and is about 50 miles south of Minneapolis. The Estate flies the PCs there in business class and puts them up in a hotel called the Regency Inn.

Liza Banks has a room in the same hotel. If needed, use NPC agent stats for Banks, except that she is level 7 in tasks related to persuasion.

Wertz Residence: Gwen lives with her mother, Joyce; her father, Tom, died a year ago in a traffic accident. The house seems normal enough, though all the lights are on at any given time. Joyce and Gwen knew the prize team would be coming and are overjoyed to welcome guests into their home, serving everyone doughnuts and pop (people in Minnesota call soda “pop”).

Gwen runs off to grab her Person Power Prototype One, which looks like a flashlight. If handled, bare skin contact causes the bulb to light. If a PC with an eye for the Strange examines the flashlight, it seems like nothing more than a particularly clever application of Standard Physics.

The prize delivery mission goes by the book—unless the facade crumbles.

The Facade Crumbles: If the PCs push Gwen or Joyce too hard on where the idea for the flashlight came from, what Gwen’s next project will be, or some related topic, equanimity begins to fade. Gwen grows distressed but tries to hide it, while Joyce seems to show less and less emotion. Eventually, Gwen says, “Don’t make Mommy angry!” to which Joyce (who’s actually Joyce2) replies in a robotic monotone, “Too late.”

If the PCs explore the house before, during, or after the confab with the family in the living room, they might find the real Joyce Wertz in the basement, strapped into a chair and connected to an artifact called the power rod. Her body powers the whole house. (The PCs can also find three anoetic cyphers in the basement on a work table filled with other equipment: a level 5 uninterruptible power source, a level 3 visual displacement device, and a level 5 set of wings.)

Joyce2 is an android that Gwen created to be her mom stand-in after her real mom become emotionally distant after the death of her husband. The creation of Joyce2 triggered Gwen’s quickening, whereupon she gained strange abilities.

Unfortunately, Joyce2 took its new position a little too seriously. The android violently opposes any action that might lead to anyone discovering its true nature or trying to separate it from Gwen.

Gwendolyn Wertz: level 2, level 8 for all tasks related to robotics and electronics

Repercussions: Gwendolyn Wertz, if she survives, could use psychological counseling, and her real mother (if rescued from the basement) could use a lot of medical care. If the PCs arrange for such treatment through the Estate, they are given a commendation. If they leave the task to Liza Banks, Gwen and Joyce still get help, but not as quickly or as fully, possibly leaving Gwen with permanent emotional damage, which she might one day decide to take out on the PCs.

The Estate research chief (Hertzfeld) makes a good case for turning the power rod artifact over to him so he can conduct further tests on it. He’s worried that it might be too much of a strain on the laws of Standard Physics.

Form: A 1-foot-long (0.3 m) metallic rod ringed with wires and electronic connectors Effect: Each time the end of the metallic rod is touched to a living, warm-blooded creature (or on a successful melee attack), the user can siphon a designated amount of health from the target, up to the artifact’s level. For each point of health drained, the power rod gains a charge roughly equivalent to 30 kWh.

The power rod can store a total of about 1,000 kWh (after which it stops draining health until some of its charge is used up). If a charged rod is connected to a piece of machinery that can use electrical power, the rod powers the machinery until its charge is exhausted.