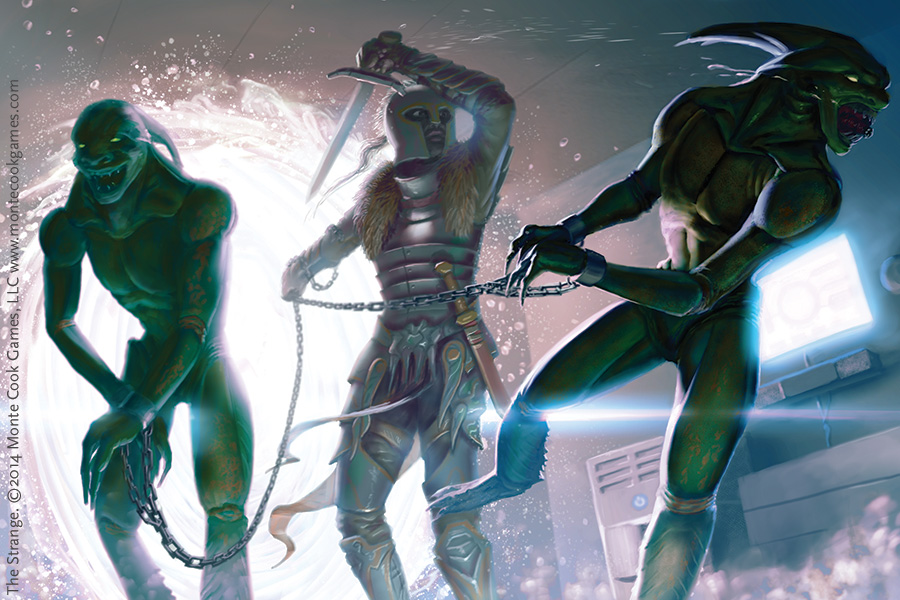 The general idea in the Cypher System (the engine behind both Numenera and The Strange) is that if the GM wants to reflect an NPC doing something special, acting out of desperation, or just really giving it her all, the thing to do is to use a GM intrusion. With the intrusion, the NPC can do something that would normally break the rules–take an extra action, perform a (seemingly) impossible task, get really lucky, etc. That’s not the most exciting use of a GM intrusion, but it’s in the toolbox and should be used as needed.

Cypher System GMs are also free to do whatever need be done to make for a great story, rules be damned. Because these are narrative-focused games, not competitive exercises to test character min-maxing abilities. However, sometimes it’s nice to have a bit of a fall-back, “rule of thumb” way of spicing up encounters or more accurately reflecting an NPC in the context of the story without using the larger, more dramatic GM intrusion.

In a system where PCs can decide to put effort into actions that are important to them, it sort of makes sense to allow NPCs to do the same. It makes the (usually very simple) NPCs in a Cypher System game more complicated, but just a little. Effort for NPCs works just like Effort for PCs, but remember that PCs do all the die rolling, so using Effort for an NPC would often affect the difficulty of a PC’s roll.

Effort can also effectively alter an NPC’s level on a one-time basis, when there’s no PC roll involved. It would mean that, when comparing level to difficulty to determine if a NPC can accomplish something (climb a wall, break down a door, figure out a device, resist a poison’s effects), they’d be treated as a level higher than normal.

Like PCs, however, NPC Effort should be a limited resource. I recommend two methods.

Method 1: Based on Level

Method 2: Based on Health

This is harsher on the NPCs, but much easier to keep track of. Basically, the idea is that 1 point of health equals a level of Effort. If the GM wants to make an NPC’s attack 1 step more difficult to avoid, it costs the NPC a point of health. A pretty grand expenditure for a level 2 NPC, but a pretty easy price to pay for a level 6 NPC. Which is really as it should be, actually. And of course, 2 levels of Effort are 2 points of health, 3 levels are 3 points of health, and so on. You might want to cap it at 6 levels–the most Effort a PC can use at once–but that’s up to you.

This isn’t so different than how PCs work, really, since stat Pools are sort of the equivalent of PC health. (It’s not as 1-for-1 as it looks, but the comparison is apt.)

This optional rule makes NPCs “more powerful,” but in the Cypher System, that does no damage to the balance of the game because PC vs. NPC power is not the fulcrum upon which the game turns. What it really does is makes NPCs more interesting. When you describe the barbaric warrior going into a bloody frenzy as he’s backed into a corner, and suddenly the players find the difficulties of their Speed defense rolls increasing, that’s both interesting and truer to the story you’re trying to create.