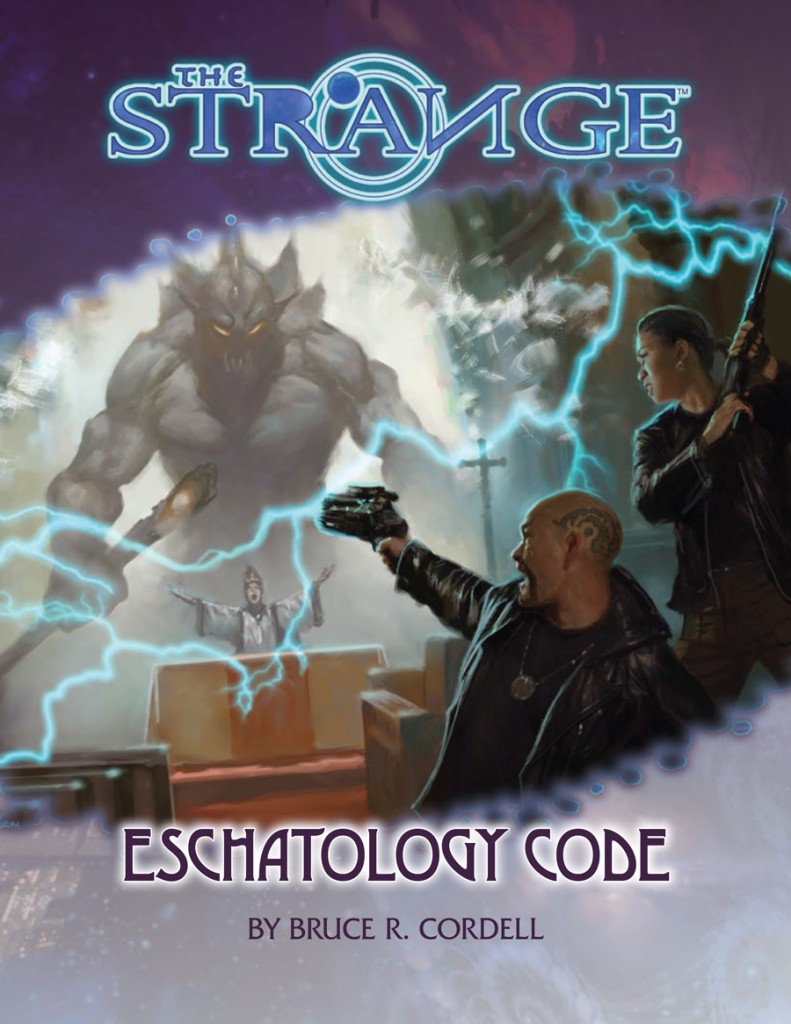 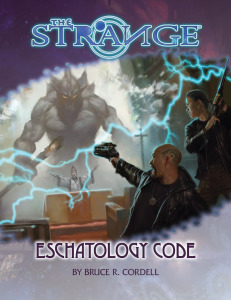 My first session of Eschatology Code was by far THE best game of Gen Con 2014. ~GM James Walls

Back in early 2014, our customer service guru, Tammie Ryan, asked me for the name and brief description of the adventure for The Strange I’d be running at Gen Con later that year. She explained that I didn’t have to have everything nailed down yet, but a summary was definitely necessary so that the adventure would appear in the event listing.

Gen Con was months and months away, so I hadn’t given its adventures too much thought, at least when it came to specific encounters. But since an entire outline for the adventure wasn’t yet necessary, I didn’t feel too much pressure. Casting around in the dark recesses of my mind, I pulled up the title Eschatology Code. At first, I didn’t know where I was going, but it sounded promising. Especially given the meaning of “eschatology.”

Eschatology (from the Merriam-Webster dictionary): 1. A branch of theology concerned with the final events in the history of the world or of humankind.

Later that day, after spending some time time letting concepts stew, I wrote back: “Eschatology Code: When the All Souls Church of Deliverance in the small town of Sioux Falls begins counting down to the End Days, the Estate and the Office of Strategic Recursion both send operatives to find out if the miracles claimed on the local news have anything to do with the Strange.” That’s what went on to appear in the Gen Con event listings.

With that out of the way, I didn’t give the adventure much thought for several months. When the time came around again to actually write the thing, I pulled up the description I’d sent to Tammie out of email archives. “Oh yeah,” I thought. “This will be cool. Let’s see, let’s start things off with the PCs being attacked by something that followed them onto the jet!”

Fast forward to the present. Gen Con is a few months behind us. Eschatology Code was the Gen Con adventure a select number of GMs ran for players at the convention. They had a great time (see below), but now it’s time to open things up to everyone. Eschatology Code is now on sale for whoever wants  to show their players the same kind of experience the Gen Con attendees enjoyed.

Eschatology Code is designed to be a “convention adventure,” meaning that it runs about four hours, comes with six pre-generated characters, and is a quick prep for the GMs. It can also be tucked into a longer campaign.

So, what’s it like to run Eschatology Code? We asked some of our first GMs — those who ran this adventure at GenCon before it was available to the general public — to talk a little about their experiences. This is what they had to say.

A great intro adventure, very exciting and interesting, with a lot of replay value to me (as a GM) because the ways that players solve problems can vary greatly and there is a lot of room for creativity to tweak the situations a little here and there. I’ve run it twice and will be running it again.​

Other notes for when running Eschatology Code at home: Cats, pizza, beer, and port optional but recommended. In all seriousness, like all Cypher System games, I really love using the physical materials like cypher cards and XP cards (or something to represent XP at least), and I printed out a few images from the adventure to throw down on the table for dramatic effect—”You see THIS”.

I ran two sessions of Eschatology Code at Gen Con and both were an absolute blast! Unlike many typical published adventures, this one starts off with an exciting and challenging encounter within minutes of starting. Being the first session of The Strange for all of my Gen Con players, the intense early action sequence was the perfect hook to get them interested in the tone and feel of the game. In Eschatology Code cooperation, planning, and teamwork are vital to the success of the mission, and as a GM it was absolutely delightful to watch my players communicate so openly with each other.

What’s even more interesting is that both of my groups ended the adventure in almost opposite ways. One group of four players was able to use subterfuge and stealth to overcome adversity while the other, a group of six, engaged in hilarious hijinks and over-the-top action. This is possible due to Eschatology Code’s non-linear format and structure which allows for unique problem solving and a feeling that anything is possible… which is the absolute truth when running The Strange.

Another terrific point is that the sample characters are not your typical boring pre-gens. Each one is thoroughly described with an interesting backstory and connections to other members of the team. These backstories are more than flavor text, and can be used to influence and augment the story. Our group of six players became heavily invested in their backstories, and one in particular (playing L.G. Babcock) was the life of the party, even signing autographs (in-character) by the session’s end. This group of Estate agents must have received some rather unorthodox training, since they used social media and a box of donuts to complete one part of their mission. Our table was loud and raucous and while I was somewhat nervous that we were disturbing other folks in the room, I couldn’t resist but get caught up in the fun and excitement of the table.

Whether you want to run a quick one-shot or throw this into the middle of a longer campaign, Eschatology Code is a great way to add something Strange to your table!

Eschatology Code is available now at the MCG store!