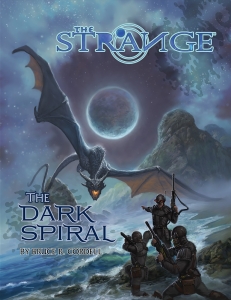 Enjoy another free mini-adventure for The Strange excerpted from The Dark Spiral. (The first was Morrison Fellowship Prize Delivery.) If you like these mini-adventures, keep playing by picking up the full 96 page adventure:

The Dark Spiral is 33% off for only 2 more days at DriveThruRPG!

The player characters are operatives of the Estate, which protects Earth from what lurks in various limited worlds called recursions. The Estate’s research chief, Hertzfeld, approaches the PCs and asks their help. Hertzfeld has been testing the creation of special custom recursions through various experimental methods. As he explains:

• “I’m experimenting with recursion technology. I’m trying to emulate the quality the recursion of Ruk once possessed that allowed it to travel the Chaosphere under the direction of a pilot. I’ve made a lot of progress.”

• “I’ve also had a few setbacks. That’s why I want your help. I’ve created gates into a few secondary recursions that don’t follow the expected rules. One in particular vexes me. I need someone to scout it and report back. The recursion is designated R639. I would love to take a team in myself, but I’m already too far behind on other pressing tasks.”

If the PCs are interested, Hertzfeld takes them to the Recursion Lab on the Estate Campus and shows them the gate to recursion R639.

Recursion Lab: Research on the nature of gates, the interaction of laws, the nature of fundament, and related inquiry is conducted in this stand-alone structure. The lab usually contains about ten or fifteen technicians working at any one time. Several recursion gates are found here in locked cubbies, each flanked by scientific work benches filled with laboratory equipment.

Hertzfeld says the matter could be quickly resolved by sealing recursion R639, but it’d be a shame to close access to a location that might be rich in cyphers, artifacts, or newly discovered attributes.

R639, Mystery Recursion: The secondary recursion Hertzfeld wants the PCs to scout is codenamed R639. They can access it through an inapposite gate, which he has annealed to the surface of a large mirror that leans against the wall in a bare chamber accessible by keycode.

Hertzfeld and his technicians sent a robot through the gate (not unlike a bomb-disposal robot), which returned after spending some time on the other side taking pictures and measurements. That allowed them to determine that the recursion supports Standard Physics and looks almost exactly like Earth.

Level: 4
Laws: Standard Physics, Exotic Playable Races: None (translating in is impossible; the recursion can be accessed only by inapposite gate) Foci: As Earth

Skills: As Earth
Connection to Strange: Above the clouds lies the Strange

Connection to Earth: One inapposite gate in the Estate’s Recursion Lab

Size: Indeterminate
Spark: 0%
Trait: Afraid. The difficulty of all rolls to resist or fight off anxiety, fear, or panic is increased by one step.

Entering R639: PCs who enter R639 discover a dim replica of the Estate campus, although one that seems to have been without power or people for several months. Cloud cover is constant and heavy, which means it’s always dreary and cold. Beyond the campus, the rest of the city is also visible, equally dark and also without power.

A cursory examination would lead one to believe it really is the Earth (because no matter how far an explorer goes, the recursion seems to stretch farther), though an Earth where all higher animals, including humans, are missing. If PCs explore further, they eventually find a disturbing aspect to R639. The basements and sublevels of the Estate and nearby structures are filled with empty clothes and desiccated dust. It’s almost as if everyone retreated to the lowest place they could find but failed to escape whatever hunted them. Whatever found them left behind only a trace of ash and clothing. R639’s previous population seems to have been utterly wiped out.

Loot: Despite being a “copy” of the campus in the real world, the Estate in R639 doesn’t have the cyphers the real Estate possesses. That said, searching the “remains” yields 1d6 randomly determined cyphers.

Optional Encounter: PCs can get in and out of this foreboding recursion without learning what led to the current circumstances, but if they seem determined to find answers, you shouldn’t disappoint them. In this case, their investigation finally uncovers something: a flock of something strange wings overhead. From a distance it’s hard to tell what kind of birds they are, but when four of the flying things split off from the group, the PCs discover they’re not birds at all, but something like sheets of fleshy clay shot through with undulating, mouthlike openings that appear, disappear, open, and close in rhythmic pulses.

The things attack the PCs and give no quarter. The flying sheets are thoniks.

This is a good time for the characters to make Intellect defense rolls to avoid a round of panic (see R639’s trait). PCs who fail spend their next turn running scared, standing frozen in horror, fainting, or screaming their fool heads off (their choice). Affected characters find that the difficulty of defending against attacks by the thoniks is increased by two steps (although a character who faints is automatically hit if targeted by a thonik).

The thonik presence suggests that the recursion has somehow been flayed open, allowing creatures of the Strange to enter it, perhaps at will. That’s not a good thing.

Repercussions: If the PCs report what they’ve found (and especially if they fought thoniks), Hertzfeld makes a command decision to use his negation rifle on the gate to R639.

Effect: When the rifle is fired, a designated recursion gate (translation or inapposite) within short range collapses if it leads to a recursion whose level is equal to or less than the artifact’s level. The recursion beyond the gate isn’t otherwise affected.