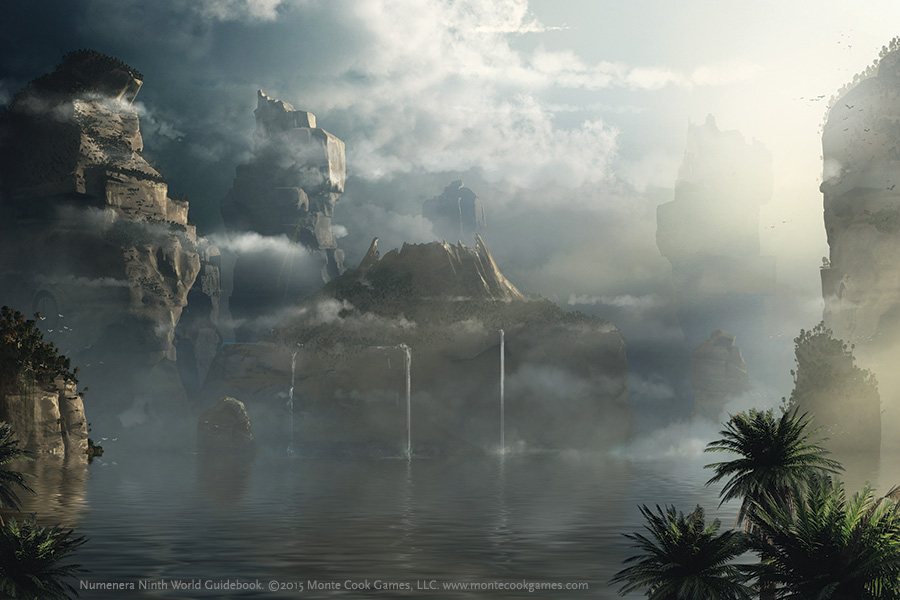 After we finished with the Numenera Kickstarter, Shanna and I were making plans on how we were going to produce all the books that had arisen from stretch goals. We discussed each one, and talked about all the ideas we had for them. When we got to the last one, The Ninth World Guidebook, I said without hesitation, “this is the one I am most excited about.”

And for good reason. It’s a big, meaty look at the Ninth World. It has a wild-ideas-per-page ratio that I think is amazing. You can open it up almost anywhere and find ideas for months of Numenera adventures. That’s my favorite kind of RPG book–one that’s really just a big book of ideas to inspire me and wow my players.

In fact, if the book presents a difficulty, it’s that there’s so much to deal with. How can you possibly cram it all into one campaign?

The simple answer is, you don’t. You pick and choose the stuff you like best, or that your game group will like best. But what if you like some cool stuff in the Frozen South, and some stuff in Vralk? Those places are literally 2,000 miles apart. Even if they’ve got mounts, that’s a trip that will take months, and it’s likely exceedingly dangerous. You’ve got some options.

First, remember that this is a game of fantastic technology. A teleporter is quick, easy, and perfectly reasonable for the setting. But you don’t have to go that dramatic, either. Imagine how much fun your group would have if they got their hands on a flying craft of some kind–something akin to a jet airliner maybe (but suitably weird, of course–it’s got crystal engines powered by human breath or an organic brain that must be tricked into flying where the PCs want to go each time). You might think that such a thing would be overpowering, but remember one truth about almost all the mysterious tech/“magic” in the setting: once its starts getting used, it rarely lasts forever. The Ninth Worlders rarely know how to maintain or even refuel the devices they find. So the PCs have an airliner that can take them anywhere in the world for a few trips and then it breaks down, its energy depletes, or it gets horribly damaged in a confrontation with something really scary–something scary enough to attack a jet powered craft in flight! That’s not overpowering, it’s facilitating. It’s adventure fuel.

But there’s another option as well. Look at The Ninth World Guidebook less as a gazetteer and more like that big book of ideas I mentioned before. Worry less about what goes where, and just use what you like, where you like it. Maybe you think the mnethashi (page 130) are cool, weird creatures and so you make them residents of Pytheron, where the campaign is located. You even take the idea that some of them are integrated into the human civilization, but instead of being integrated into the hierarchy of Vralk as presented, in your campaign they are assassins and enforcers for more sinister aspects of Pytheron’s rulers.

Or maybe you think that the Forest of Razors (page 199) is a great adventuring locale and a cool visual for your players, but the likelihood of the PCs getting all the way to the Lands of the Dawn any time soon is not good. So just grab the whole concept and plot it down in the Beyond, maybe in the Cold Desert. Why not? It’s your campaign.

In other words, what’s right for your game is much more important than the “canon” of the Ninth World. Once the book makes its way to your game table, all that stuff is yours to use at that table however you wish. We talk a lot about making the rules your own in Numenera, but truthfully it applies to the setting material as well. 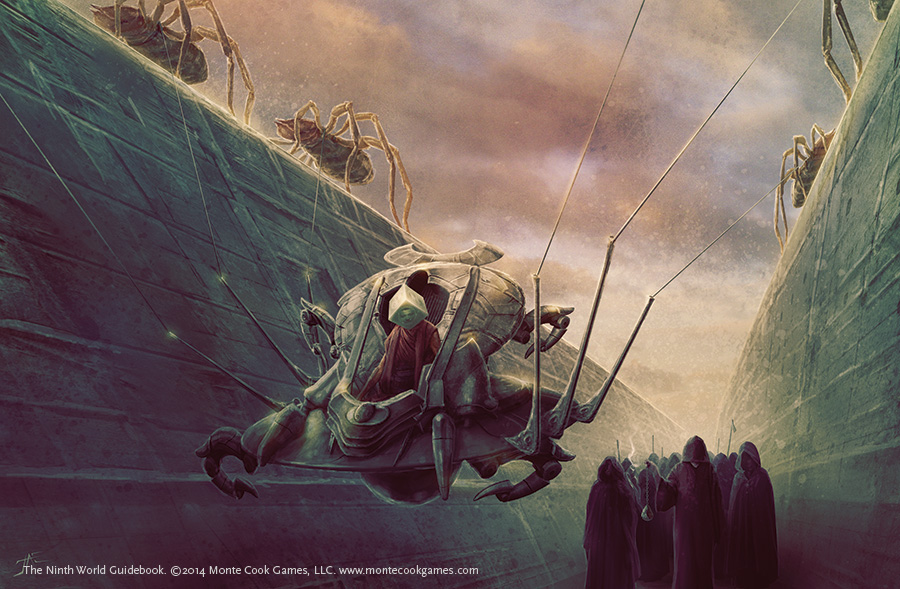 And when the PCs reach the spot where the Forest of Razors is “supposed” to be, or find themselves in Vralk, replace the forest or the mnethashi with something else. Maybe something of your own.

Which brings me to my final thought on how you can use all this varied material in your campaign: as inspiration for the creation your own stuff. I know for me, nothing gives me cool ideas better and faster than cool ideas. The weird is like a virus, always propagating and spreading. The Kileti-fior in Cheloh (found in Lostrei, page 108) is a strange locale, grand in scope, with a vast pit in the middle of it from which weird energies arise when the priests conduct their rituals. Maybe reading about it and the bizarre creature called the Ustiliator that floats over this wellspring of power gives you an idea for a location in an adventure for your group, with a similar pit in a prior world ruin, but instead of weird energy, your pit produces a mist that causes mutation in anyone an evil group of cultists suspends over it.

In short, page through this massive, lavishly illustrated tome and you’ll not only find hundreds of ideas you want to use in some fashion, but you’ll be inspired with all sorts of ideas of your own. Use these ideas any way you want. It’s your Ninth World Guidebook and your campaign.