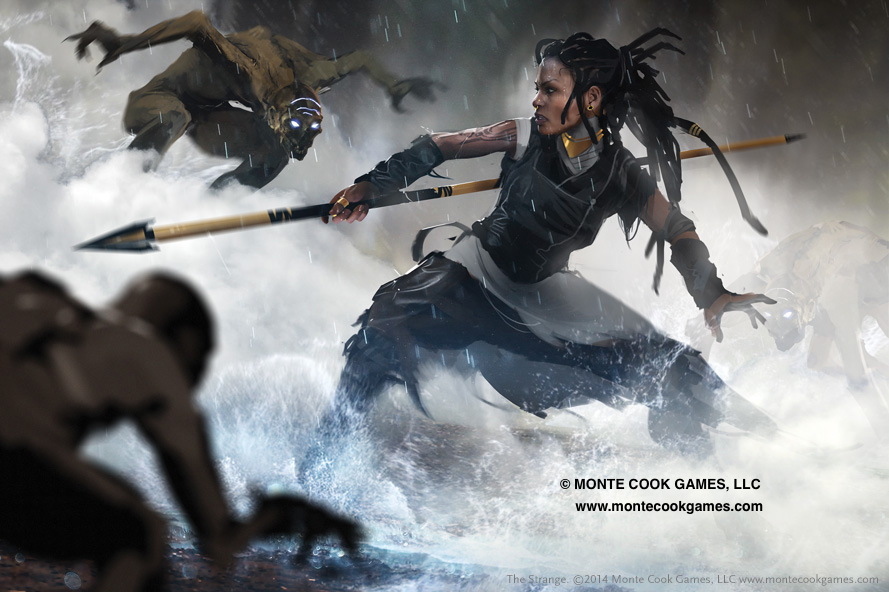 This is intentional. There are two reasons.

1. Games that have a more traditional “hit point” stat for characters almost always address the fact that hit points are decidedly abstract. In other words, sometimes when you’re hit and lose hit points, you’re not really hit–maybe you just really strained to avoid being struck, for example. Numenera (and The Strange) actually just address this sort of thing more directly. I expend points from my Speed Pool, showing that I’m tiring myself a bit, but I do it to avoid being chomped by the weird creature’s bite, which–if it hit–would cost me very likely more points from my Might Pool. This is not hard to imagine happening in a movie or a book. In fact, it portrays fictional (and perhaps actual) combat pretty well. I’m not actually getting “hit” very often, but being in the fight is pretty exhausting. An actual hit, then, becomes far more dramatic and memorable.

If I’m a character with a lot more points in my Might Pool than my Speed Pool, I probably won’t do that. Instead, I’ll just “stand there and take it.” This also makes sense in both the fictional reality and the game mechanics. A big brute often can take a lot of punishment more easily than it can dodge.

2. Getting hit in combat is very often a really bad thing. Very often, an attack has some additional bad effect, like poison, stunning, or worse. Because PCs often focus heavily on Speed defense through skills and Effort–for obvious reasons–PCs aren’t actually hit in combat all that often. But the system still portrays the attrition that arises from a prolonged fight, or multiple successive fights.

However, even if it’s just straight up points of damage and no special additional effect, giving the player the option of using Effort to avoid the blow puts him more in control of the situation. For example, if I’ve only got 5 points left in my Might Pool and 4 points left in my Speed Pool, and I’m facing a foe that is dealing around 6 points of damage when she hits, I choose to use a level of Effort on my Speed Defense roll, because I know that won’t put my Speed Pool to 0, but a hit from my foe might put my Might Pool to 0. This gives me, as the player, more control over whether or not I’ll be Impaired.

Basically, then, while Numenera and The Strange are still abstractions, the mechanics involved both suggest a more direct relationship to the story and give the player more control over his own fate, both of which are intentional goals of the system.