So you may have heard we put together a new Kickstarter, sort of with the holidays in mind. It’s not for a new game, but rather a new format. We are making an exclusive boxed set edition of Numenera. This is really exciting for us.

A few weeks ago, we went to the Lucca Comics and Games event in Italy. It’s the second biggest comics and/or games convention in the world. There, our friends and partners at Wyrd Edizioni released the Italian edition of Numenera (an aptly named company to put out a weird game, right?). They produced it as a boxed set, and it’s beautiful.

So beautiful, in fact, that it inspired us. What if we made a boxed set for English speakers? Boxes, multiple booklets, and various inserts are very expensive to produce. Would it be worth it? Would people like it? We decided to risk it and see. 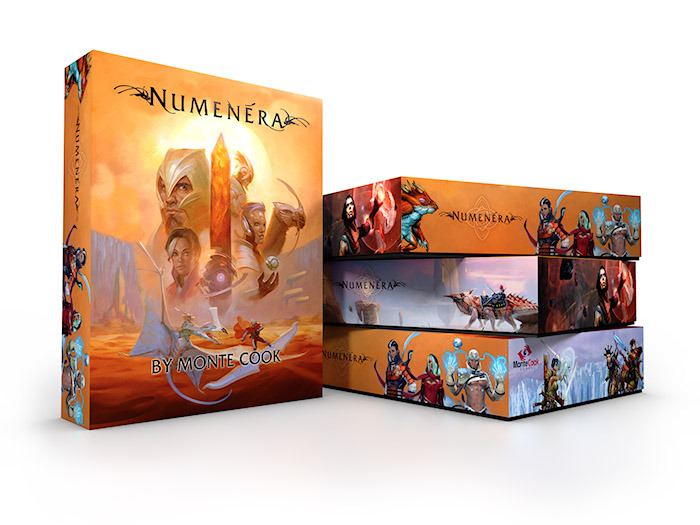 Well, the Kickstarter has had a lot of attention and success already, blowing past our expectations out of the gate. (Numenera seems to have a way of doing that.) So it seems like a lot of people thought like we did, and agreed that a boxed set would be cool.

But why? Why are boxed sets so great? They’re kind of “old school,” really. So there’s some nostalgia involved. But nostalgia’s not enough of a reason by itself to do this.

First and foremost, there’s the beautiful box itself. We have great artwork in Numenera, and a talented graphic designer, and we will make the box look great. (And since it’s a Kickstarter exclusive and won’t be a retail item, it can look great on all six sides. No promo text or bar codes to clutter it up.) Further, we’ll make the box really sturdy, and of a good size so that it can hold a lot of stuff. If you just get nothing but a box, you’ll still have a great way to store your corebook, dice, a number of supplements, and your game notes, as well as some pencils or whatever else you need. This box will be a relic you’ll have for years and years to come.

The box also offers the advantage of not having everything in one book. Sure, the Numenera corebook is gorgeous–I couldn’t be more proud of it–but sometimes it’d be nice to have the Setting Book and the GM Guide open at once, while a player flips through the Player Book to look up her choices for when she reaches the next tier.

What’s more, if you look at the Kickstarter, you’ll see that we have already reached stretch goals where we add some content from our glimmers to those books in the box. So the GM Guide has Injecting the Weird and Taking the Narrative by the Tail incorporated into it, and the Adventure Book has Vortex and Into the Violet Vale added to it. This is a unique opportunity to get that material in print, and incorporated right into the related content.

And lastly, there’s just so much else we can throw into the box. As of this writing, the RELIQUARY box has not only the poster map but also a beautiful cloth version of that map. It’s got an art print signed by editor Shanna Germain and myself. It’s got a deck of XP Cards. It’s got six pregen characters with artwork. An art book showcasing the great art from the game (and making it easier to use that artwork in the game). And a $10 gift certificate. Dice. And how about a couple of character creation handouts on high quality material, a pad of 25 character sheets, a rules reference sheet, and a gorgeous Numenera notebook and a pencil? Everything you need to play. Even a brand new deck of the Weird as well. And we’re only about halfway done. What other things will be in there when you open the box? I, for one, can’t wait to find out. . .