A Peek Inside Into the Night (Well, Two Peeks, Really!)

This post gives you a look between the covers of the forthcoming Into the Night sourcebook for Numenera. Into the Night comes out in September, but you can pre-order it through the Into the Ninth World Kickstarter, running through September 9th. You can also download a free sample!

The moon that shines above the Earth has seen eight great civilizations rise and fall, and now it watches a new one, the ninth, rise. But the moon that the people of the Ninth World see changes. On any given night, it might have a blue-green stripe running across its middle. Some call it the moon’s belt. Others refer to the occasions it appears as a “bounded moon.” The Corhay people of western Matheunis tell a story of a great hero named Thullane who used a rope of woven seaweed to lasso the evil moon and keep it in submission.

The truth is just as strange, if not stranger, but unknown to all except the midnight pilgrims who travel to the moon using various means. 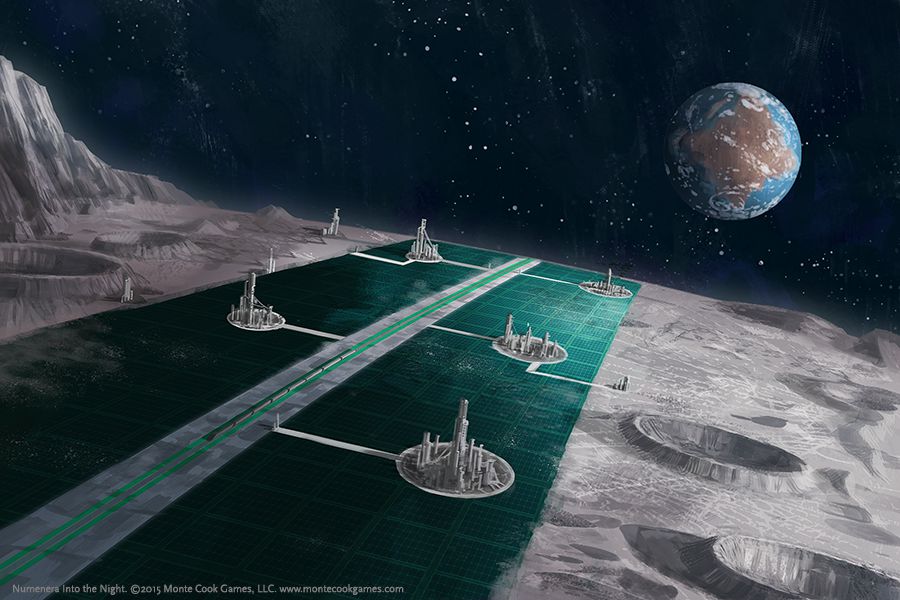 Numenera is a science fantasy game. Although that phrase evokes many ideas, one of the things that term suggests—no, begs—is that there be some kind of space travel involved. We’ve hinted at it in the past, after all. Many of the creatures of the Ninth World (and don’t forget the visitants) very likely have extraterrestrial origins. We’ve mentioned that at least one of the prior worlds was the hub of an interstellar empire. Or maybe even an intergalactic one. In Numenera we deal with truly epic lengths of time, but the idea of an empire spanning multiple galaxies suggests some kind of faster-than-light travel—and in a setting where one can travel to other universes and rewrite the laws of reality, is that really so hard to believe?

If we’re going to explore the universe of Numenera, we know it’s got to be big. Jaw-dropping. And, most importantly, weird. A simple moonbase not is enough. No, the moon shifts in time. A simple “desert planet” or “water planet” isn’t enough for this setting either. No, here you’ll find a black hole used as a storage device for minds, and a living Dyson sphere.

Like the Ninth World, the realms beyond Earth in a weird science fantasy setting need to be dark, mysterious, terrifying, and filled with the unknown.

Here are just a few of those wonders you might discover as you travel Into the Night:

How does the Ninth World traveler leave the dirt and drit of the Earth and begin to explore the outer reaches of the stars? Perhaps she learns what’s truly at the top of the Beanstalk, discovers and activates the Stellar Door, or even uncovers a long-buried numenera craft that will carry her into the sky.

Places Within the Grasp of Earth

Branu’s Kiss, Calram, the moon… there are just a few of the places that exist within Earth’s reach. What is the connection between the Aeon Priests and the Calramites? Why must Branu guard the Crux of the Kiss, and from whom? Is there an ancient purpose to the twelve Empty Embassies that stand upon the moon?

The Sun’s Other Children

Explore farther and you arrive at the other planets and structures with whom Earth still shares a sun. They are not the planets as we know them today, but as the people of Ninth World know them: the lush, green fertility of the once-red planet known as Naharrai; the brightly shining light of Urvanas, the wreck of the prior-world void-sailing vessel called the Vlerryn.

Step into the space beyond our known worlds, and that’s when things begin to get truly weird. Visit the world of Perelande, where everyone’s a visitant, of a sort. Attempt to land upon the rogue sunless planet of Xeobrencus, where giant life flourishes within its worldwide oceans. Or dare to travel to the megastructure of the Thon Iridescence, constructed around the cavity of a black hole. 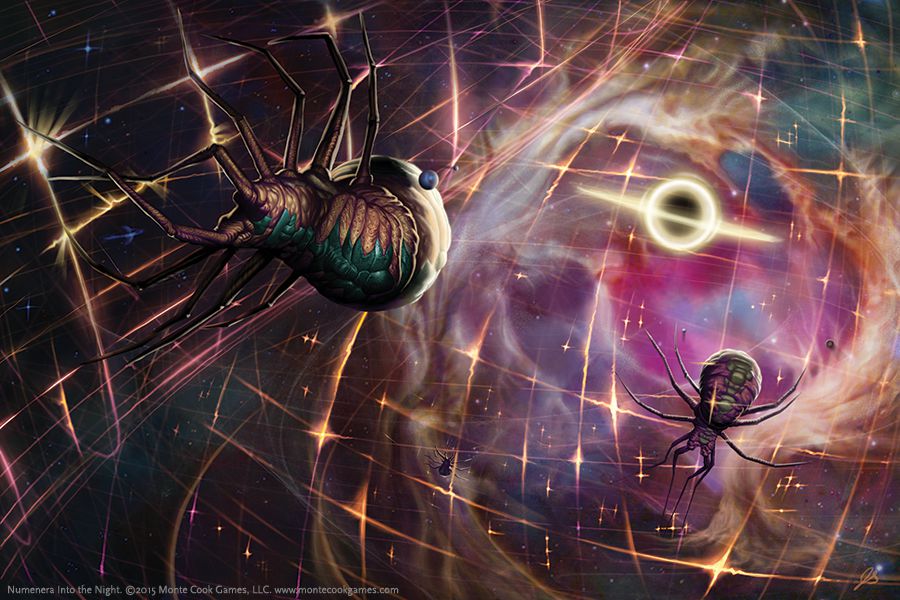 Creatures of the Stars

If you think the sorg warbreakers are terrifying, wait until you encounter a pack of ravenous inconae or are torn apart by the supersonic screech of the malork.

Do you really have what it takes to become a midnight pilgrim and explore the vast wonders that exist beyond the Earth? You’ll know soon enough.

Get the PDF with the Book!

Into the Night comes out in late September, but you can get a great deal on pre-ordering it through our current Into the Ninth World Kickstarter campaign, running through September 9th. Order the print book at the regular price and get the PDF version as well, along with an exclusive poster map (in print and PDF) and a special PDF supplement. Simply choose the JUST A BOOK backer level.

You may also be interested in the LOVER OF ALL BOOKS level, which offers Into the Night plus a bunch of our forthcoming Numenera titles, along with a ton of great stretch goals we’ve already hit (and we’re adding more almost daily), at an incredible price.

Get the Free Preview!

Now that you’ve had an overview of Into the Night, how would you like an actual sample of the book? We’ve just made one available—twelve actual pages from the Into the Night! Download it and have a look. There are even two complete creatures that you can introduce to your campaign right now! 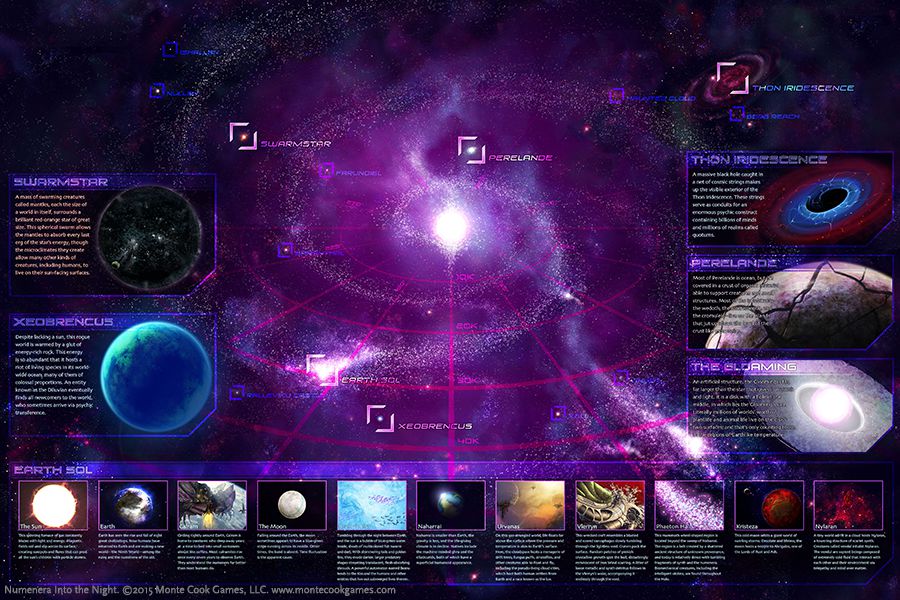