A handy and beautiful new format for Numenera—available for just a few weeks!

A couple of weeks ago, Monte and Shanna were guests at the Lucca Comics & Games Festival in Lucca, Italy. While many Americans haven’t even heard of this show, it’s larger than Gen Con and San Diego Comic Con combined. Monte and Shanna were there to help our Italian translator launch their version of Numenera (the first of half a dozen foreign-language versions coming for the game). It was a huge success. 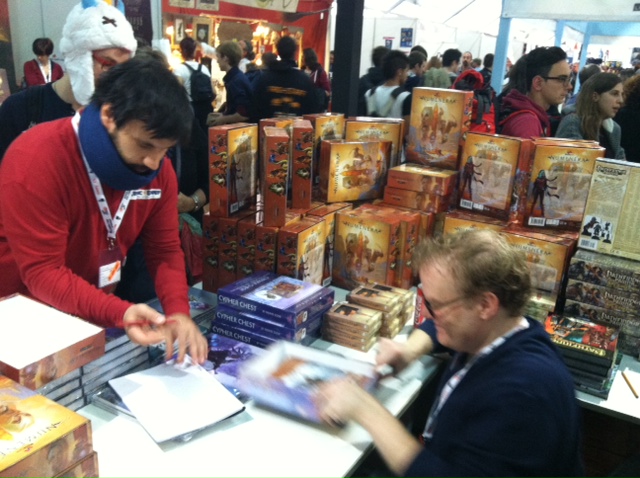 It was also a boxed set. Our Italian licensee had decided that a boxed set would do better in their marketplace than a single hardcover book. Boxed RPGs are a tough sell in the US retail market, so we’d never really considered going that route. But we love the Italian version, and so did fans around the world who saw the images we posted on Facebook and Twitter. Everyone loved it so much we started planning an English language Numenera boxed set right away. And thus the Exclusive Numenera Boxed Set Edition was born!

This isn’t a new edition of Numenera—just a new format that’s attractive and handy. (Although we are looking at adding some really cool bits and pieces that take maximum advantage of the boxed format.) Since we aren’t writing or revising very much, we figured, “Why wait?” So we’re jumping right in with a Kickstarter campaign, which we just launched this morning. 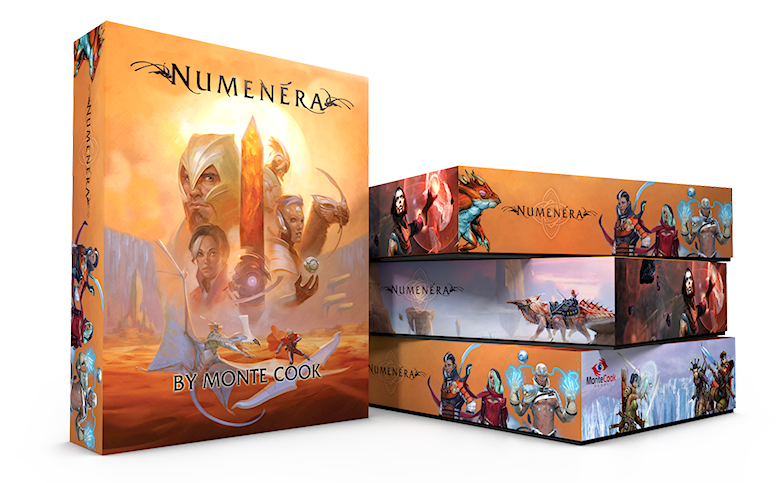 If you already own Numenera and just want a cool box to store you gaming stuff in, you can get that at the JUST THE BOX backer level.

If you’re new to Numenera, or could use a second copy, the STRONGBOX version contains all the game and setting content from the corebook, but broken out into four handy softcover books. It also has character sheets, a poster map, and a character creation handout. You’re getting everything the corebook has, just in a different format that’s easy to share around the game table. Plus there’s space for another few books along with your pencils, dice, and other gaming bits and bobs. Great for storing and transporting Numenera in style—it’s going to look incredible!

But of course, a boxed set could be so much more! So we’re also offering the RELIQUARY backer level. You’ll get everything the STRONGBOX backer gets, but we’re upgrading the content with a pad of character sheets (instead of just a few), an XP Deck, an art print autographed by Monte and Shanna, and a cloth version of the poster map. We’d love to add some pregenerated characters, GM and player content from some of our glimmers added right into the relevant books, maybe some new content, dice, cards, and so on—everything to make a perfect Numenera experience in a single box. But we’ll have to hit some stretch goals to make it happen. If we do, these new items will go into every RELIQUARY box.

There’s a fourth backer level: NUMENERA SUPERFAN. The SUPERFAN backer levels for The Strange’s Kickstarter campaign were really popular, and turned out to be a great deal for those backers. So we’re offering a level that gets you the RELIQUARY boxed set, plus a subscription to over a year’s worth of Numenera releases—so you know you’ll continue to get great new stuff to stick in your box!

(Retailers: There’s also a backer level for you. The Exclusive Numenera Boxed Set Edition will not be available through distribution, but we wanted to give you a way to take part too.)

Oh, and one more thing: Because we’re heading into the holiday season, and “box” just seems to suggest “present,” we’re making it especially easy to give or get this as a gift.

The Kickstarter campaign runs for three weeks only, so if this sounds as cool to you as it does to us, check it out and make your pledge right away!