Blast from the Past: Charles and the Crocodile 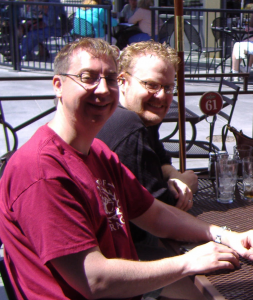 Longtime followers know that montecook.com has been around since about 1999 or so, and that most of the pre-2012 content isn’t here (or anywhere online) anymore. That’s a long sad tale for another time, but it means that if I want to find old web content, it’s not easy. In this case, however, digging it up was worth it. My announcement yesterday that Charles Ryan was joining Monte Cook Games and Charles’ own blog post about it reminded us both of the “Charles and the Crocodile” story posted back two iterations of montecook.com previous. A lot of the details of our lives are different now, but here is the article, exactly as it was published back in 2003:

Charles and the Crocodile

Sue and I went to Cancun, Mexico, with our friends Charles and Tammie Ryan. They used to work for Last Unicorn Games and now Charles works at Wizards of the Coast (he did a lot of work on Wheel of Time and D20 Modern) and he’s done a lot of other cool things in the biz, not the least of which was run his own company, Chameleon Eclectic. So I said to Sue yesterday, “I’ve just got to tell the ‘Charles and the Crocodile’ story in the Line of Sight this week. It needs to be told.” And here it is.

So the four of us are having a great time in the sunny and warm Yucatan. During the week we spent together on vacation, I saw a side of Charles I hadn’t really seen before — what I like to call “the crazy maniac side.”

Cancun is built on a narrow strip of land between a huge lagoon and the Caribbean Sea. One night we were at a restaurant called the Laguna Grill. Nice place. We’re out on a big wooden deck over the lagoon (hence the name). Every once in a while during dinner, we’d see the patrons get up from their seats and run over to the edge of the deck and peer down into the water. So of course, we got up to see what was up.

There was a crocodile right under the deck that would occasionally come out. A big one. If you leaned against the railing, you’d be 4 feet from a big ol’ croc. Pretty cool.

As dinner continued, we saw what was going on “behind the curtain.” Occasionally, a waiter, as he cleared a table, would take some scraps and throw them over the side of the deck. Half a minute later, the patrons get a crocodile show. I watched one time as it snapped up a good-sized piece of chicken. It seemed to really like it.

Eventually, we finish dinner, decide to forgo dessert, and go about the whole business of handling the check. Now, one thing important to understand about this trip was how generally wet things were. Not only was it really humid, but we’d often find ourselves, after doing something like dinner or going on a tour to a Mayan ruin like Chichen Itzá, in the position of being able to go for a wade in the ocean or a dip in the hot tub. This meant that we just never knew when we were going to get wet. We couldn’t wear our swim suits 24/7, so we just sort of resigned ourselves to the idea that sometimes our shoes, our shorts, our pants, or whatever would get wet. Realizing this, Tammie — smart woman that she is — carried her cash, ID, and credit cards in a little plastic Ziploc bag.

So, like I said, we’re settling the bill, and Tammie’s holding the little bag, sealed, in her hand. Suddenly, it slips out of her hand and drops to the deck.

Now, the gaps between the boards of the wooden deck are really narrow. When Tammie said that it had slipped through the boards and went through, down into the water, I didn’t believe her. “Impossible,” I said, looking at the deck.

It took about 10 seconds to realize that I was all wet — and not in the good, hot tub way. She was right. In what must be a one-in-a-thousand chance, the bag fell and landed at just the right angle so that it could slip through the tiny gap between the boards. It was gone.

It’s at this point in the story, I’m told, that my memory and Charles’ deviate a bit. In his version, he hesitated for a while, not knowing what to do, before he figured out a plan. The way I remember it, I looked around and said aloud, “Now what do we do?” not even considering — not in my wildest dreams — that we’d get the bag back. In my mind, I’m already going through the process of getting Tammie a new ID, canceling the credit cards, and so on. However, I’m shook out of these mental plans by activity around me. I looked around.

Charles already had his shoes off and was rolling up his pant legs.

I’d like to say that lots of things went through my mind at this point, but really it was only one thing: “No fricken way. Is he insane?”

Before I could even say those insightful words, Charles was over the side of the deck and in the water. (There’s no thoughtful hesitation in my version. Sorry, Charles.)

Of course this draws a crowd fast. Tammie’s in shock. Sue and I are standing at the side of the deck saying helpful things like, “Charles, there’s a crocodile in that water.”

A woman begins running around the restaurant, saying with manic glee, “There’s a guy down in the water with the crocodile!” One of the waiters, somewhat bemused, comes over. This, incidentally is the guy who threw chicken to the croc a few minutes earlier. We all explain to him what’s going on, and he hands Charles his little waiter flashlight that he uses to make sure your bill is right out on the dimly lit deck.

Charles uses the light and reports that he can see the bag, floating in the water under the deck. This however, doesn’t make me feel good — quite the opposite. The deck is about 4 feet above the level of the water, and it’s really dark under there. I now realize that Charles is planning on going under the deck to get the bag.

Now, I’ll admit publicly right here that I have a real fear of dark water. If I can’t see what’s in the water, I really don’t want to go in. I’m not a night swimmer. When I was a kid, I lived near a lake. Everyone knew that you didn’t swim under the dock at the lake (or so I was told). That’s where the leeches and other icky things were. But not even in my little kid nightmares did I imagine going under a dock or deck, at night — where a crocodile lived. That’s too many childhood fears all at once for my liking.

I was startled out of this horrific reverie, however, by a large splash not far off. I looked at Charles and he looked at me and — much to his credit — he scrambled out of the water and up onto a sandy, silt-covered bit of land by a mangrove tree. We looked around, but didn’t see anything. The splash was big, and fairly close, but not extremely close. Charles, more to himself than to anyone said, “That crocodile has all the restaurant leftovers he can eat. He doesn’t want to eat me.”

I helpfully reminded Charles that while he was right, the croc might very well lash out at an intruder entering its territory. That didn’t stop him, though. He was already wading into the water again. It was up to his knees. He looked under the deck again to keep his eye on the bag. Meanwhile, the other restaurant patrons standing by the railing helpfully offered to give us croc reports.

Sue and I began asking for something long that Charles could use to snag the bag. Another waiter appeared with a 5-foot aluminum pole with a squeegee on it. Charles tried it, but it wasn’t nearly long enough. He handed the pole to me. I gripped it like a spear, determined that if I saw the crocodile, I’d get in one good smack that might — just maybe — buy Charles an extra half-second as he ran back out of the water. The more I hefted the light aluminum pole, though, the more I knew that it probably wouldn’t even do that.

By this time, the manager had come over. Unlike the entertained waiters and the shocked (and I think, secretly bloodthirsty) patrons, he was really freaked out. I’m sure thoughts of lawsuits and insurance and crazy Americans were going through his mind. He tried to coax Charles out of the lagoon (I believe the words “It’s not worth your life” came up), but Charles wasn’t swayed. In typical Charles fashion, he calmly, rationally explained for the umpteenth time that the crocodile was a good distance away and that he could see the bag and it wasn’t far. (There’s a real gamer trait that allows us to calmly and rationally explain something that is neither calm nor rational. “Okay, I’m just going to tiptoe past the ancient red dragon and take the jewel, and everything will be fine….”)

Then, however, the now-enthusiastic waiters came out with a really long aluminum pole. I think it was an attachment for the shorter pole that I had, to allow someone to clean a second-story window from the ground. They handed that pole to Charles, who then ducked under the deck a bit to fish for the baggie. I stood watch with my useless weapon, praying that I wouldn’t see anything crocodile-shaped rising up out of the water. I only wanted to see Charles-shaped things at that point.

Finally, after agonizing moments, Charles was able to hook the bag and brought it out. Grasping it triumphantly, he handed it up to the still-in-shock Tammie. He climbed up onto the deck and the crowd dispersed, even the sweating manager.

We congratulated Charles, the conquering hero. We figured that the big splash was the crocodile fleeing from Charles the intruder rather than coming at him. Still, at the time we thought there might even be more than one of the animals in the water.

I’m mad they didn’t reduce our bill in thanks for the entertainment we provided. However, I’d love to go back there in a year or so to find out if they still tell patrons about the crazy American who jumped in the lagoon with the crocodiles. I’ll bet by then the story will involve multiple crocs swarming all around. I know that, by then, my version will have me fending off dozens of crocodiles with my spearlike pole while Charles got the baggie. All in all, I’d say, an EL 23 encounter.