Tales from the Ninth World has been well received. Kickstarter backers seem to be enjoying their copy, and others have purchased it at DriveThru. Thank you so much!

There are three things I want to share with Numenera fans today.

When we announced the release of Numenera last year, one thing that many people asked was, “will there be a forum for fans to discuss the game?” What I don’t think a lot of people have quite realized is, the answer is yes, and it’s existed for a few months now. It’s called the Ninth World Hub, and it is fan-created and fan-run, fully devoted to creating and fostering a community of people interested in, and eventually playing, Numenera.

Ninth World Hub is the creation of David Wilson Brown and is an outgrowth of the Numenera podcast, Transmissions From the Ninth World. If you haven’t yet checked out either the site or the podcast, you really should.

For now, let me direct your attention to this cool post on Ninth World Hub, by my friend Søren Thrustrup. It shows a video that he made after he ran a few games of Numenera at a convention in Denmark. This is just the first such fan-made video on this topic, so stay tuned for more insights from actual players.

Speaking of playing Numenera, I want to point out to everyone who is getting the ebook version of the game from the Kickstarter, as a bonus for preordering the print book from Numenera.com, or from the preorder at DriveThruRPG (still going on) that you will get your ebook on August 1. If you are also going to GenCon and interesting in running a Numenera game there, that means you would have two weeks to prepare a Numenera adventure and run it at the convention. (And prepping a Numenera adventure is very easy.)

If you want to run a game in open gaming, and you tell us about it ahead of time (email [email protected]), we will not only post about it here with your name and the time (and details about the game if you wish), we will direct players your way at the show itself, provide you with some cool stuff for you and the players ahead of time, and give you a small thank-you gift after the game is over.

The Numenera corebook is off to press! Here is the finished cover, front and back. Click to embiggen: 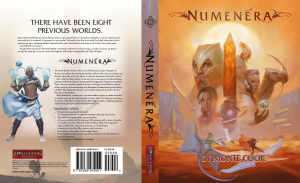