With the launch of the Numenera corebook, we are also launching two different card deck products from DriveThruCards. You can get these as pdfs (so you can print out the cards yourselves) or as POD, so you can get them on professionally printed, quality cardstock. Most Kickstarter backers are getting at least the pdf versions as rewards, although many chose to get the print versions as reward add-ons. Both will also be on sale for non-backers on Wednesday. 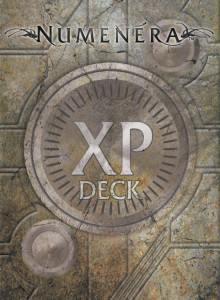 In Numenera, you are awarded many of your XP in-game. When a GM uses the GM Intrusion mechanic, she awards you two XP, one for you and one for you to award to another player. With the XP Deck, the GM can just slide two 1 XP cards to the player as she describes the GM Intrusion. The player can then hand one to another player (for any purpose they choose–say the player did something awesome or the character had a rough go in the last encounter). Players can collect cards and then turn them in when they decide to use them (XP can be used to make rerolls, tailor character abilities to fit the story, create new items or abilities, or upgrade character abilities). The whole thing just becomes very simple, and best of all, very visual without a lot of bookkeeping. There are 30 cards (a combination of 1XP and 4 XP cards) in the XP Deck. 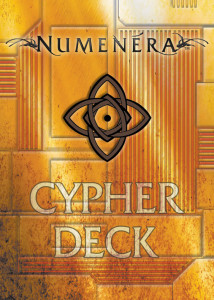 In Numenera, character abilities come in many forms. One such form is the cypher, which is a one-use device that grants any of a variety of incredible powers. Cyphers are used up somewhat quickly (rather than hoarded) and are usually replaced quickly as well. In other words, PCs go through a lot of cyphers. There are tables in Numenera to facilitate the random generation of cyphers (or the GM can just pick) but an even faster and easier way is to use the Cypher Deck.

The deck consists of 20 cards that have images representing the form the cypher takes–something you wear, something you hold in your hand, something that comes in pill form, and so on. Then, there are 100 cards that have either two or three different powers an item can have. Pulling a card from both of these groups of cards gives you everything you need to know (both story-wise and mechanically) about the cypher, and the GM can physically hand the power card to the player so that they can remember what abilities they have on hand at that moment.

We hope you’ll find either or both of these decks add to the facilitation and fun of the game. When we release the Ninth World Bestiary, we’ll also be creating a Creature Deck to go along with it.