Page 38 of the Numenera corebook has this to say about glimmers:

“Throughout the Ninth World, people of all walks of life report random glimmers of images or information that seem to come from nowhere… While some call them visions, nanos and other experts in the numenera believe that the ‘glimmers’ are malfunctions of the datasphere which still permeates the world.”

Because of this, when we decided to create a line of short, inexpensive, ebook-only releases to support Numenera, we knew we had to call them Glimmers. These will range from a short treatises on various topics in the Ninth World to an opportunity to present new rules material or options for the game. They’re also a way for us to provide you with a short location, adventure, or a brief glimpse of a whole new way to use the rules and the setting. Because of the format, they’re not something we have to produce long before their release, so we can be agile and adaptive to player needs. If, for example, everyone says that they want more on poisons in the Ninth World, we can provide a short discussion on that topic very quickly, rather than tucking it into a larger release that would come out many months from now.

Mostly, however, Glimmers are a way for us to provide you a steady stream of affordable Numenera content, in between the larger releases (which will all be available in both print and ebook formats). It’s an opportunity for us to create material that doesn’t easily fit elsewhere but can still be a very fun addition to your game table. 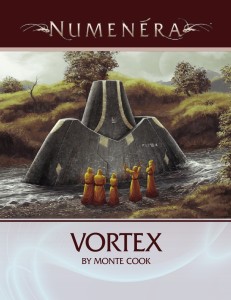 The first Glimmer is out now at DriveThruRPG.com. It’s called Vortex, and it is an 18-page adventure, plus 6 ready-to-use characters printed on our really cool character sheets. It’s a great way to start off a Numenera campaign, or a great introduction for a group new to the game. It is the scenario we ran at GenCon 2013 to introduce Numenera. Because of the two-round format we used at the convention, there are two distinct “parts” to this adventure.

Many Glimmers will be shorter and even less expensive than Vortex, which–I think you’ll agree–is actually a lot of adventure content for the price. We’re very excited about this new way for us to support the game, and hope you will be too.