Monte Says: A 1 is Not a Fumble

Everyone’s sitting around the table, immersed in the Ninth World. Bruce’s character is talking an NPC into letting him take a look at a strange numenera device the fellow found. The NPC is reluctant, and the GM asks Bruce to make a roll based on his skill at persuasion.

Bruce rolls a 1. Everyone at the table laughs. Someone says, “I think you just called his mother something obscene, Bruce.” More laughter.

It’s a funny moment, and we’ve all been there, but it also has some negative connotations. Bruce—the player, not the character, remember—didn’t do anything wrong. Rolling a 1 isn’t his fault, per se. The die just does that on its own. About 1 in 20 times, actually. But if the GM actually incorporates some version of the joke into the actual narrative of the game—that is to say, that Bruce’s character said something foolish or untoward—Bruce feels bad. 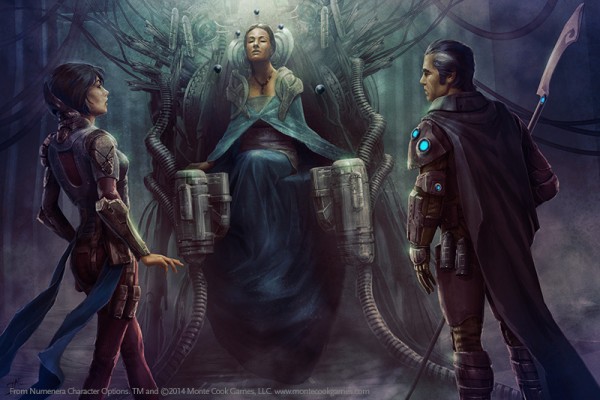 Which wouldn’t be the end of the world if it only happened once. Or rarely. But a lot of dice get rolled in a session. A lot of 1s come up. A person can have a great idea or plan for their action, and have it result in a roll of a 1. That’s why the Cypher System rules don’t say that a 1 is a fumble. It’s the trigger of a GM intrusion. An intrusion is a complication, but it’s not necessarily a complication arising from someone doing anything wrong.

In a combat situation, a GM intrusion can range from the opposing creature gaining an additional chance to attack for a round, to reinforcements for the opposition showing up. It could mean that the character accidentally shoots a friend, or drops her weapon, or slips and falls, but those should be rare. Far more often, it should be some external circumstance that arises, and not something “wrong” that the character did.

This is important because we don’t want to run games that “punish” players for rolling bad. A GM intrusion isn’t meant to be “punishment”—it’s meant to make things more interesting. But a fumble, for many people, just seems like a moment for everyone to laugh at them, and that’s not always fun.

In fact, a certain type of player (motivated by embarrassment or guilt) might feel obligated to always spend an XP to reroll a 1 every time for this reason. And that’s not the intention of the rule at all. But if the 1 means a new complication and not a goof up, that obligation might be lessened.

So in our interaction between Bruce’s character and the NPC, the 1 might indicate that some other NPC has suddenly shown up and called away the fellow with the device Bruce wanted to take a look at. Or maybe the NPC just wants Bruce to do a favor before he gives him what he wants. Or maybe the NPC shows Bruce’s character the device, but it’s not at all what Bruce was expecting. These aren’t fumbles, they’re complications, and they can open the door to even more interesting situations in the game.