One of the things that makes me happiest about Numenera is that I hear again and again that people who’ve never tried to run an RPG feel that Numenera has inspired them to give it a go. And that those people who have tried GMing the game have really enjoyed it. As ol’ Mr. Kenobi said, it’s “your first step into a much larger world.”

Here’s some miscellaneous bits of advice for all those taking the plunge and running a Numenera game, whether it’s your first time in the GM seat or the millionth. It’s probably not stuff you need to worry about for your first session, or even your second, but eventually these ideas might come in handy:

1. Prepare cyphers ahead of time. You’re likely going to generate new cyphers for the players once or even multiple times in any given session. Rolling on the table and looking them up (or even making them up on your own) takes time and can slow down the game. Numenera isn’t a game heavy on prep, but I’d generate/create a handful of cyphers before the game just to help move things along quickly. Or, if you want to be able to generate them fast during the game, use the Cypher Deck).

2. Use the Damage Track. It’s easy to overlook the usefulness of the Damage Track. While damage comes off the characters’ stat pools, it’s really the Damage Track that, well, tracks how damaged they are. Stat pool damage is mildly irritating, but moving a character one step down the damage track puts some real immediacy into the situation. Take, for example, what I have long called “the dagger to the throat problem.” I hate when in a game a character is in a position of real danger, but the game’s mechanics don’t match up to convey the threat. For example, if a dagger does 1d4 damage, holding it up to the throat of a powerful character isn’t very scary, even though in the real world, that would end in a quick death. Lots of games have solutions for this. In Numenera, it’s the damage track. Whenever the GM feels that it’s appropriate, she can just skip the normal damage (or add to it) with an immediate step–or two!–down the damage track. If that dagger held to your throat is going to put your character immediately at Debilitated, that’s suddenly a very real threat.

And the Damage Track can be used in other ways too. The duke’s agents might have been sent to kidnap one of the PCs, for example. They don’t want to kill him. They attack with clubs, saps, and/or the blunt pommels of their swords, doing damage as normal, but if they do enough damage to knock him down one step in the damage track, he’s knocked out for a minute or two (two steps down, and he’s out for hours).

In other words, combat isn’t always about killing a foe, and for Numenera PCs, the Damage Track can track other kinds of damage. If an NPC is really just trying to break the PC’s arm, a step down the track might mean the arm is seriously sprained, and two steps means it’s broken. If an NPC is using a freeze ray on a PC, maybe if that PC is impaired by the damage, what really happens is that he’s coated in ice and can barely move, and if he’s debilitated, he’s frozen solid for a time. 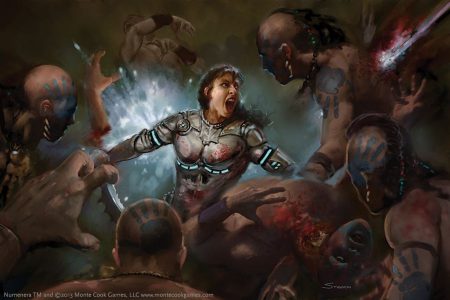 3. Use ambient damage. A PC in heavy armor might start to think herself invulnerable, but that’s silly. If it doesn’t seem like damage the PCs suffer should be reduced by Armor, don’t let it be. Heat, cold, falling damage, the stings of a cloud of insects, or similar kinds of things likely ignore the armor the PC wears. But adjudicate using logic. If the PC’s Armor comes from a force field around her, for example, that field might very well protect her from such things.

4. Tailor special effects. Cool stuff happens on a die roll of 19 or 20 (and, theoretically on a 1). Although the rules give some suggestions, there’s intentionally a lot of room to customize. Tailor them to the situation. A martial artist disarms a foe with a blow to the wrist. A target’s arm is pinned to a tree by an arrow. A foe struck in the face by a mace stumbles backward off a bridge.

Tailor the special effects to the type of attack. Remember the freeze ray I mentioned above? On a 20, a freeze ray freezes people solid for a round, and on a 19, it slows them down for a round. A incendiary detonation might start things on fire as a special effect. A magnetic burst flings metal in all directions (or bends or warps it).

And of course, a roll of 1 on a defense roll can be treated like a 19 or 20 special effect used AGAINST the defending PC.

Lastly, remember that those special rolls should count for something outside of a combat situation, too. In a social situation, a 19 or 20 might mean that the PC’s words aren’t just persuasive, they’re downright charming, which will make future interactions easier. A climbing PC doesn’t just ascend the cliff on a 20, he finds a way up that will make it easier for his friends to follow.

5. Use GM Intrusions to create, not destroy. GM intrusions aren’t an excuse to screw a player. They’re there to create new situations, or to spice up an encounter in ways that the rules wouldn’t normally allow. You don’t use a GM intrusion to say, “you get your arm caught in the machine’s workings, and it chews it off.” Instead, you say, “the sleeve of your shirt is caught in the machine’s workings. It’s pulling you into its deadly grinding mechanisms. What do you do?” It’s the difference between something awful happening (which is just punishing) and setting up the potential for something awful to happen (which is dramatic). It still might end up with a PC getting a mangled hand–I’m not saying that bad things shouldn’t happen–but the PC should have a chance to avoid it, particularly with a clever idea and/or help from her friends.

6. When in doubt, make it weird. If you don’t know what to do, introduce something weird. That’s the Numenera way.