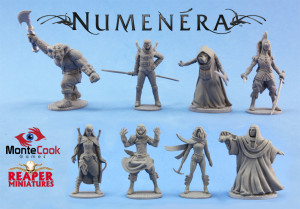 A while ago, I wrote about the fact that Reaper Miniatures is doing Numenera figures. Some special preview sets came out (and went fast) at GenCon.

But then Reaper got really busy both fulfilling their Bones Kickstarter and starting up their wildly successful Bones II Kickstarter (you should really pledge, it’s an amazing deal). The miniatures got delayed. But there’s good news: the character figures will be available as individual single-figure packs starting in December. So you can get all eight figures you see in the photo at that time.

And there’s even better news. The guys at Reaper love Numenera so much that they’ve made four Numenera creatures a stretch goal for their Bones II Kickstarter. You can see the image below. These figures are going to be AMAZING. We’re so excited.

And if there’s lots of interest in these figures, there will be more miniatures to come. We (both Reaper and Monte Cook Games) would love to see this become a whole line. Maybe we’ll even see some for The Strange! 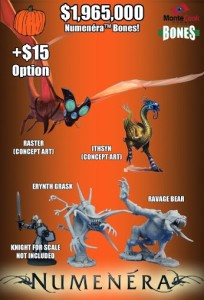