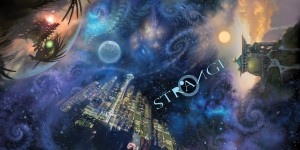 The Kickstarter for our new Cypher System game, The Strange, launched today (Wednesday the 16th) at 8:17 AM Pacific Time.

The Cypher System, of course, is the engine we use in Numenera. That means that, like Numenera, The Strange will have descriptors, types, and foci. It will have cyphers. It will have easy to create and run NPCs, PCs using Effort, and GM Intrusions.

Which is all pretty exciting.

Now, if none of that jargon means anything to you, that’s okay. You can get a lot more information at TheStrangeRPG.com. It’s got plenty of info, and it will have even more as the Kickstarter campaign continues.

It’s exciting to be starting another Kickstarter campaign. It’s been well more than a year since Numenera’s, and I have learned so much. For one thing, it’s not just me anymore. I have a whole team to help me at Monte Cook Games–a team with years of publishing experience and knowledge. And just as important, a team with the experience of having fulfilled the largest and most complex Kickstarter campaign to fulfill so far. You can see how much we learned by simply looking at the fulfillment of the Devil’s Spine adventure in print and PDF, which went almost flawlessly.

I’m eager to tell you all about The Strange, and in the coming weeks and months, I’ll be doing just that. It’s a mind-bending setting with endless possibilities. And it fits with the Cypher System perfectly. I think you’re going to like it.