Dissociative Mask Disorder (DMD) was first diagnosed in Winterhur, Switzerland, in 1991. At the time the patient—Adrienne M.—was thought to be unique; however, as we all know now, this was the flashpoint for a new breed of mental illness.

How do those afflicted with DMD do what they…do? We just don’t know. What we do know is that the DMD illness shares much in common with other, poorly understood psychological maladies, such as somnabuliform possession or conversion disorder, though, in the case of DMD, the physical effects on the outside world are…notable.

Psychokinesis, apportation, bi-location, remote viewing, telepathy—all have been demonstrated under laboratory conditions by those afflicted with DMD. Back when they would…let…us test them. 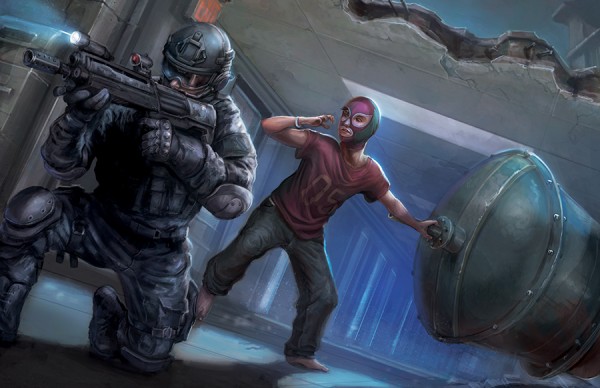 The form the disorder takes is always the same.

1) The subject, usually a teenager (more often female than male) first becomes the focus of a “disturbance.” This usually involves apportation of physical objects, property destruction, and the classic signs of a haunting—often called poltergeist activity.

2) The subject fashions a “mask.” This object’s form varies from subject to subject, but is made of, or recovered from, items that bolster a feeling of security in the subject. The subject then retreats into an internal world while wearing this mask, and enters a state of catatonia (most often reflecting catalepsy or “waxy flexibility”).

3) It is during this period, we believe, that the alter-ego is constructed. This personality functions as an entirely new persona (in the Jungian sense) and purports to be a protector of the victim of the disorder, who it feels is another person. We have learned not to interrupt this emergence process (Pittsburgh, Oct. 2015 outbreak).

4) When the new persona “wakes,” the individual adopts a name and motif (usually reflecting popular culture, most often comic-books) and sets about completing complex and poorly understood rituals. Due to their…abilities…individuals with DMD are hard to dissuade from these activities, and direct confrontation with them, even with those parties trained to deal with mortal threats, remains ill-advised.

This is a high-level summary of the disorder, which of course, says nothing to the depth of research which has been thrown at this subject since 2015. It doesn’t address the underlying questions, which pile up every day:

Ladies and gentlemen, we just don’t know. Yet.

Want to find out more about Unmasked? Get in on the Worlds of the Cypher System Kickstarter now!