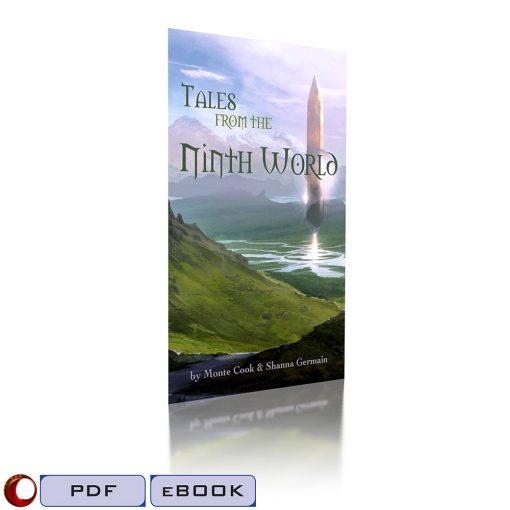 Tales from the Ninth World (PDF)

THERE HAVE BEEN EIGHT PREVIOUS WORLDS.

Each world stretched across vast millennia of time. Each played host to a race whose civilizations rose to supremacy but eventually died or scattered, disappeared or transcended. During the time that each world flourished, those that ruled it spoke to the stars, reengineered their physical bodies, and mastered form and essence, all in their own unique ways.

Each left behind remnants.

The people of the new world—the Ninth World—sometimes call these remnants magic, and who are we to say they’re wrong? But most give a unique name to the legacies of the nigh-unimaginable past. They call them…

Tales from the Ninth World is an anthology of three hefty short stories set against the evocative world of Monte Cook’s Numenera roleplaying game. In these stories, you’ll get a peek into the lives of isolated nobles, urban thieves, and a band of adventurers unlike any you’ve encountered before.

The Ninth World is filled with stories. Come explore it.

Note: Your purchase includes PDF, MOBI, and EPUB formats of this book. The PDF format (only) includes preview content from the Numenera roleplaying game. Even if you prefer to read this book on a MOBI or EPUB device, be sure to also download the PDF to see your Numenera preview!