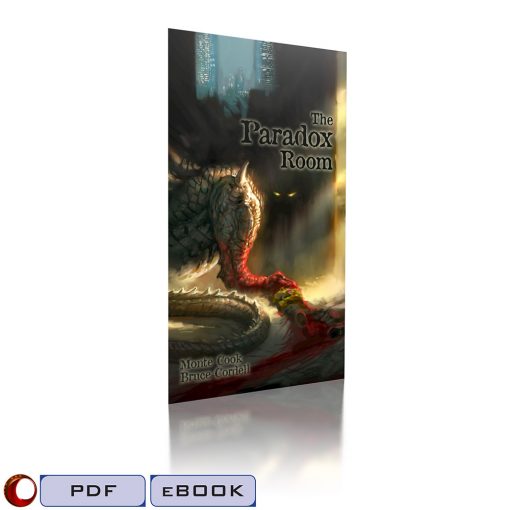 THERE IS MORE THAN ONE WORLD

The Strange is a place where fictional worlds, called recursions, become realities of their own. Recursions are unique but limited worlds with their own laws of science and even magic, seeded into the dark energy network underlying reality called the Strange. Some recursions contain extravagant sorcery, imprisoned devils, and lost gods. Others are populated by creatures that were never human, born of the fiction of somewhere else. Each recursion is a place of wonder, but each risks drawing the attention of vast entities that scuttle through the primordial reaches of the Strange like bloated spiders on a web: voracious planetovores that eat worlds—recursions and prime worlds (such as Earth) alike.

The Paradox Room is an anthology of two short stories set within the universe of The Strange roleplaying game. In “The Stranger” a monster out of a recursion called Ardeyn discovers that Earth isn’t the prey-laden hunting ground it expected. In “Four Winds,” a doctoral candidate on sabbatical discovers a dangerous new dimension to her Native American heritage.

Note: This digital edition includes the PDF, ePub and Mobi (Kindle) versions of the book.