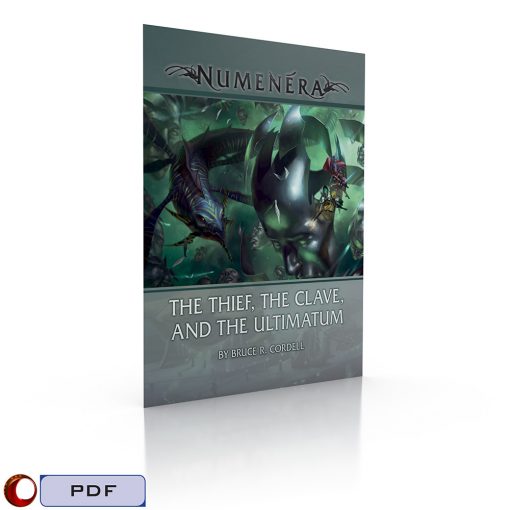 The Thief, the Clave, and the Ultimatum

You Could Be Playing Five Minutes From Now with this Instant Adventure!

A powerful entity of the prior worlds threatens to destroy the clave of Naraderan unless the people turn over an artifact called the Raft. But there’s a problem: Someone has stolen the Raft, and it’s up the PCs to track down the thief in a vast and ancient ruin. In return, the Aeon Priests of Naraderan promise the PCs a single use of the Raft—a vessel that can venture beneath the seas, into the stars, and even through to alternate worlds.

The Thief, the Clave, and the Ultimatum is a complete standalone adventure. It works well as a one-shot or fits easily into any Numenera campaign. And it’s a great launch point for adventures taking characters Into the Deep, Into the Night, or to the forthcoming Into the Outside.

With this Instant Adventure, you can skip the prep and get right to playing. The innovative Instant Adventure format makes prepping for an RPG no more difficult or time-consuming than setting up a board game, while showcasing the wonder, mystery, and awe of the Ninth World. This isn’t an adventure seed or sketchy idea—it’s a complete adventure in a new format that requires minimal prep. Run it as a one-shot, or drop it into your ongoing campaign when you don’t have time to prep your own adventures!