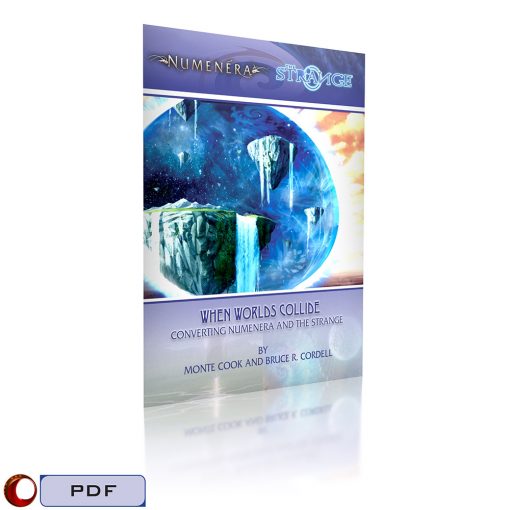 When Worlds Collide: Converting Numenera and The Strange (PDF)

Do you want to loot Numenera material for your The Strange campaign? Do you want to lift a few new foci and descriptors from The Strange and use them in Numenera? How about mashing both games together in their entirety, both rules and setting?

The system—the “game engine,” if you will— behind both The Strange and Numenera is called the Cypher System. Although the games are different, their core concepts are the same. Both involve difficulties rated from 1 to 10, and both have characters who use Effort, skills, and assets to reduce that difficulty and roll a d20 to see if they succeed. Both games have characters described by a single sentence: I’m a blank blank who blanks. And although the types, creatures, cyphers, and most of the descriptors and foci are different from game to game, the form in which they are presented, and the way they fit into the game as a whole, is the same.

When Worlds Collide lets you take full advantage of this commonality, giving you all the tools you need to lift material from Numenera or The Strange and drop it into the other. If you have Numenera and The Strange, it’s like doubling the content of each!