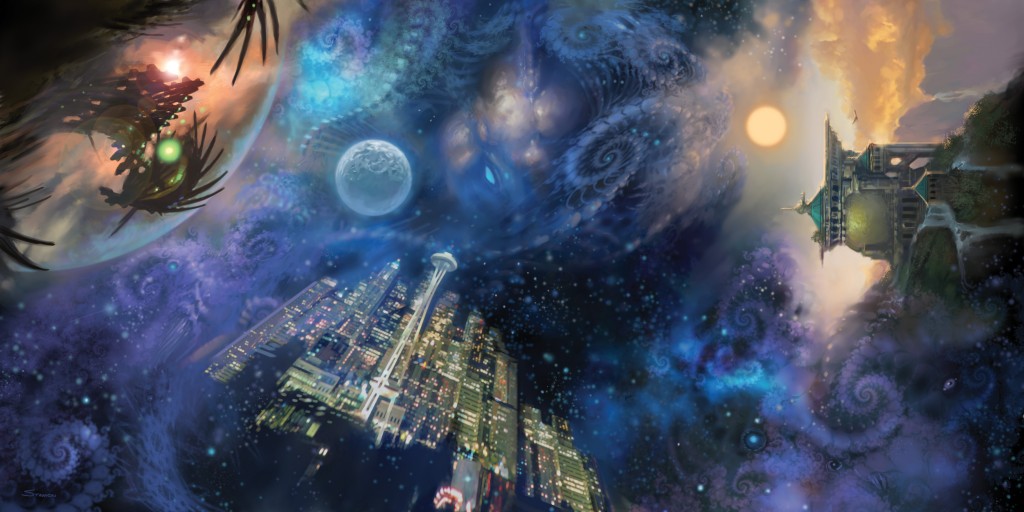 The Strange Kickstarter has 9 days left. We’re nearing $250,000, at which point we unlock a big stretch goal: a deluxe, leatherbound version of the corebook with special endpapers, a bookmark, color plates, and high quality, gilt pages. If you’ve seen the Numenera deluxe corebook, you know that these books are things of beauty.

Funding-wise, we’re at about the same level as Numenera was at this point in the campaign, which is thrilling and exciting. However, we don’t have quite as many backers as Numenera did at this point. And to me, getting new backers is as amazing and important as the actual funding, because I am confident that Kickstarter backers are the thought-leaders of the gaming world. The alpha gamers, so to speak. They’re the ones that make the decisions about what their game group plays.

When you launch a new game, like Numenera or The Strange, getting the thought leaders on your side is crucial, and while we’re nearing 2000 backers–which is amazing–I’d like to see that number even higher.

Well, first off, let me make it clear that that’s fine. We appreciate the interest and support any way you want to give it. However, if you want to talk about saving money, let me point out that, for example, the $80 BASIC STRANGER level of the Kickstarter gets you The Strange corebook and all the ebooks from the campaign–right now, that’s a huge hardcover book and six ebooks (and it keeps getting better). Total value of all that is about double what you’re paying for it. Plus, we pay up to $10 of your shipping expense, so for most people (including everyone in the US), shipping is completely covered.

And some of the higher levels get you even more stuff, or, perhaps more crucially, stuff that you can’t get elsewhere, like the newly announced deluxe version of the corebook, playtest materials, signed bookplates, signed prints, dice, and a lot more.

But you know what? Forget all that. Because here’s the real crux of it. Money that goes into supporting the Kickstarter goes into the creation and development of the game. Numenera wouldn’t be the product that it is if it wasn’t for Kickstarter supporters. There’s just no other way to say it.

In other words, when I look at the ever-increasing funding total on the Kickstarter page, I don’t think “that’s money in my pocket,” I think, “that’s an even better product–or products.” Because that’s the way it works. The more funding we get, the better we make the books. Again, I refer you to Numenera. That project was originally going to be a single book half the size of the actual corebook, with a small amount of black and white art. Now it’s a GORGEOUS 400+ page book with a whole line of amazing support products. And that’s because of the Kickstarter. And more specifically, because of the support of the backers.

The most common thing I hear nowadays about the Numenera Kickstarter? Regret from people who didn’t back it that wished they hadn’t missed it. Not only was it filled with great deals and exclusive stuff, but every single backer became a part of the game. Don’t miss out on a similar experience now. And if you have backed The Strange, please help spread the word–because the more people you can get to back it, the better (and more numerous) the books that you get will be. It’s that simple.