Why would a Weird Deck be cool? And how about a GM Intrusion Deck—why would you want something like that?

Before I answer, I’ve got one more question: Have you ever used a writing prompt?

A writing prompt is something fiction writers sometimes throw into the mix to help generate an idea for a new story, a new scene in a novel, or as something that can be developed for a character’s motivation or personality. A prompt could be as simple as an object, like a picket fence, a scarf, or a sleeping dog, or as complex as a situation like an argument over a debt, the last words of a dying friend, or the delivery of terrible news.

Both the Weird Deck and the GM Intrusion Deck are akin to writing prompts, but they’re for the Game Master. Think of both decks as adventure prompts, which you as the GM can call on in advance as you prepare an adventure or encounter, or in the moment for an encounter you’re currently running.

The Weird Deck delivers inspiration for keeping your Ninth World campaign as weird and wondrous as Numenera should always be. Ideas to make players gasp with wonder, wrinkle their foreheads in disbelief, or exclaim with delight. Things that can’t be explained by either a Ninth World character or a 21st-century player, but—when done right—suggest that in a prior world, there was a reason, an explicable cause, or a purpose to it. Sometimes the weird is creepy. Sometimes it’s disturbing. Sometimes, however, it’s merely odd or unexpected. Ultimately, the point is to reinforce that the inhabitants of the prior worlds were incomprehensibly advanced and alien, as were their motives, actions, and creations.

For instance, when the PCs enter an area, you might decide to pull a card from the Weird Deck to add a little something extra to the moment. Inspired by the result of the card draw, you let observant PCs know that in the greenish light of the room, none of their shadows match their bodies. You could decide to develop this further and perhaps even build an entire encounter off the weird prompt. Or you might decide that mis-matched shadows are merely weird flavor. Either way, the PCs will remember it.

The GM Intrusion Deck works similarly, but intrusions are events with direct (and usually dire) effect on the PCs. A GM intrusion is a chance for the Numenera GM to really shine. When used properly, you absolutely have the players’ attention, with each person around the table hanging on your every word, waiting to see what’s going to happen. Like the twist in a movie’s plot, or a heightening of a novel’s tension, when you intrude the story of the game changes unexpectedly, and requires the PCs to act.

As an example, while the PCs are talking to an important NPC, you pull a GM Intrusion card from the deck. Based on the idea there, you tell the PCs that a trapdoor uenexpectely opens beneath the PCs and NPCs alike, dropping all of them into a dangerous situation that no one was prepared to deal with. This event adds a new wrinkle to the story of the game, and will influence later interactions with the NPC in question, assuming the NPC even survives whatever happens next.

All the content of these decks could be put into tables and charts (and in fact, we offer such tables in our Injecting the Weird and Taking the Narrative by the Tail: GM Intrusions and Special Effects glimmers). But they’re so much handier in deck format. A deck is great because you can touch, shuffle, and manipulate it in a different and new way, which always opens up new possibilities. And they’re quicker than chart lookups–faster when prepping your adventures, and much less disruptive at the gaming table. At MCG, we like card decks!

As it happens, you’re in luck! Because both the Weird Deck and the GM Intrusion Deck are on their way as new components of the exclusive Numenera Boxed Set Edition. If you haven’t already, check out the campaign. You might see something weird in all the right ways. 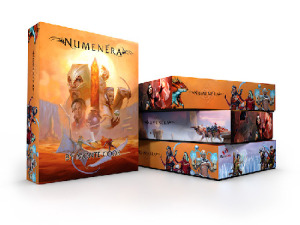