For most of us, when we sit down to play a character in a tabletop RPG, it takes a while to mentally shake off the events of the day from the real world: work, school, kids–we live full, busy lives. Once we manage that, it then takes a bit more to get reacquainted with the setting, to remember what was happening last time in the campaign, and to refresh our familiarity with the rules of the game. Only after all that can we start to get hold of who our individual character is, grasp some aspect of the character’s personality and role within the group, and really get a shot at role playing.

That’s why it’s so vital for most games to have some clearly defined roles for characters. Because all that takes a while, and so for the first portion of the game, we might not be fully able to do much in terms of character beyond the predetermined group role. If I’m a D&D fighter or a Numenera glaive, I know–barring all else–I’m the physical character who probably takes the lead, weapon in hand. If I’m a D&D wizard or a Numenera nano, I’m going to be more cautious and rely on my weird powers. These archetypal roles are useful tools for a game, allowing us to get the game started even while the players are all still finding their footing, not just in the first session, but every session. Clear roles don’t just help introduce the game, but also facilitate its episodic nature.

But in (most) fiction, characters do more than just rely on a defined role. They take on aspects unique to them. I’m not just a glaive, I’m an intelligent glaive. This makes me somewhat different from the archetype. Further, I’m an intellgent glaive who controls gravity. I’m quite different from the classic archetype. The Cypher System of Numenera, by creating a whole sentence describing a character, gives more, distinctive flavor and personality.

Yet characters are still more than just that. I’m Fallone the intelligent glaive who controls gravity. I come from a small village and I’m intimidated by cities and large crowds. My brother was killed by an abhuman raid when I was young and I still bear those bestial creatures a grudge. I try to do what’s right in the eyes of my family and of the Lords of Charesh, who, my mother taught me, were the entities that watched over all of us, and rewarded those who were true to themselves. I probably enjoy alcohol more than I should, and its gotten me into trouble more than once.

But even if we reach a point where we have a character developed well beyond his or her role in the group, we can still go further. Because characters aren’t just defined. They change and develop over time. This is probably one of the biggest challenges of being a player in an RPG. Because sometimes it’s hard to tell the difference between a character who changes and one who’s simply acting “out of character.” Roleplaying games don’t always offer a lot of time for character examination and contemplation. There’s four or five other people at the table, after all, and they’re all trying to play a role, have a moment in the spotlight, and deal with the challenges the Game Master puts in front of them, just like you.

Since this format doesn’t allow any way to showcase the internal monologues of a character, the easiest and probably best way to portray character development–a character arc–is to allow the circumstances to change the character. Imagine Fallone, as defined above, loses a close friend to the hands of more abhuman creatures. What had been a sort of backstory characteristic now becomes a defining trait. Now Fallone hates abhumans and thinks of little but revenge. He learns more about them and how to better fight them. In Numenera, this can be reflected by using short and medium term benefits when you spend XP. But we can go further than that. As detailed in the upcoming Numenera Character Options book, working with the GM you can change your descriptor, and even your focus, to reflect a reaction to events that transpire in the story of the campaign. He could take on the vengeful descriptor, and/or the hunts abhumans focus (these are both new foci in Numenera Character Options). 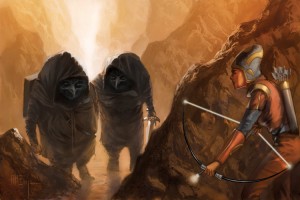 And maybe that’s Fallone’s arc. Going on adventures and experiencing losses at the hands of some horrific enemies, he becomes a grim hunter. But maybe his arc goes on. Eventually, he learns that vengeance is no way to drive your life, at least not long term. Surely the tenets of the Lords of Charesh and the lessons his parents taught him in childhood would suggest that’s no way to live. This latter growth is, of course, pretty advanced character development for an RPG, because it doesn’t rely on the events in the game table. Or rather, it’s a reaction counter to those events. Because even as Fallone cleaves his way through all sorts of abhumans, he changes again. Perhaps once more he returns to his old descriptor, and maybe even his old focus. Or he takes on new ones still. That’s up to the player, working with the GM.

The point is, in a roleplaying game, really developing a character–and having that character change over time and perhaps even grow–is challenging. The opportunities to develop a character should always be as unfettered as possible. This goal should be facilitated, if possible, through flexible rules and generosity on the part of the GM. The rules of the game are less important than the story and the characters, for players that really want to delve into it.