GMs are always on the lookout for good adventure prompts, and sometimes those inspirations come by way of great fantasy or science fiction art. But why limit yourself to merely make-believe when it comes to inspiring ideas to stun and amaze your players? Especially when the real world offers a wealth of wonderful and idea-generating locations, as gathered into collections by photographers and various other online curators over the years.

I’ve located a short selection of such photography collections, and provided a few adventure prompts to go along with one of the pictures presented in each link. The adventure prompts are suitable for Numenera, but also for The Strange (so keep this link in your bookmarks). Of course, you could adapt the suggested adventure ideas in almost any RPG.

The linked image collections are available on the web at the time of this writing, which means they’re available for you to use in you your game, either as the inspiration for an entirely new adventure, or as part of an ongoing adventure.

Landscape Arch Adventure Prompt: The PCs arrive at the location thanks to an external aid (a map, a GPS-like service, or by way of a guide). According to the directions they’ve been given, if someone walks to the center of the arch and drops a bit of their blood on the stone, some kind of portent will be shown that character–a genetically triggered lock will open a secret underground base nearby, a powerful being will appear before the PC, or the PC becomes possessed by some kind of mysterious entity.

Lavender Sunrise Adventure Prompt: Chasing a fugitive, the PCs arrive at the location. The purple flowers are unknown to the PCs, but the fugitive is aware of their properties, and plows through, hoping the PCs follow. Unlike what the PCs might expect, the flowers do not produce a soporific or other directly debilitative effect. But they do serve as homes for swarms of stinging wasp-like creatures (or robots), or alternatively, as a place to evade the same. 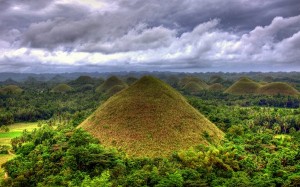 Chocolate Hills Adventure Prompt: An area the PCs are traveling through is a wide region of mounds that seem to straddle the difference between a natural landscape feature and buried artificial structures. Investigation of a mound reveals that it conforms to the covered surface of a larger piece of contiguous iron. Further investigation leads to the conclusion the entire region lies atop some kind of metallic entity of enormous size.

Dragon’s Blood Trees Adventure Prompt: Fleeing for their lives, the PCs find themselves in a region of odd trees. The grove is sacred to a creature that lives in the area–possibly a massive hairy humanoid of white fur, an alien in hiding, or a ghost–and if the PCs do it a favor, it does one for them in turn. 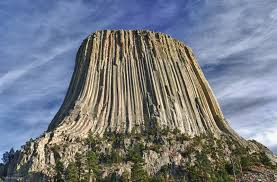 Devil’s Tower Adventure Prompt: The PCs are looking for the grave of an important NPC, though they’re not clear on what it looks like. When they find the towering, apparently natural land feature, they realize that the grave is something far more significant than a simple final resting spot, but possibly an entire complex related to the deceased (?) NPC.

(Thanks to Bruce Baugh for this blog topic idea.)

This entry was posted in Game Better. Bookmark the permalink.