Running Into the Violet Vale 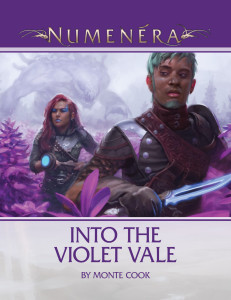 The adventure is a blast and the story it tells is very compelling! ~GM Andrew Marlowe

Every Wednesday, a group of us gather at what we call “MCG West” (read: the kitchen table) to play Numenera. Typically, Monte is our GM, and it isn’t until later that we discover that some portion of what our characters just went through will show up in a published Numenera adventure or source book.

It’s pretty awesome being Monte’s guinea pig, honestly. He comes up with crazy creatures, wild locations, and heartbreaking scenarios. And then we get to turn them into books and watch players have their own experiences with these places, foes, and friends.

We were in the middle of our ongoing campaign when our players came upon a place known at the Violet Vale. It was bizarre, scary (two of us almost died when that [blank] came out of the [blank] and did [blank]!), and tons of fun. My character Nyere still has the artifact that she snagged from that experience — she calls it her “boop machine” and uses it regularly to try and take out foes.

Now the place called the Violet Vale–and the experiences that surround it–have been turned into a Numenera glimmer adventure! Of course, a lot has changed in the written adventure since we got to have that experience at the table, but Into the Violet Vale is still just as fun and weird (maybe even more so) than it was when Monte used us as his guinea pigs.

Into the Violet Vale is designed to be a “convention adventure,” meaning that it runs about four hours, comes with six pre-generated characters, and is a quick prep for the GMs. It can also be tucked into a longer campaign (the way that Monte did at our table).

So, what’s it like to run Into the Violet Vale? We asked some of our first GMs — those who ran this adventure at GenCon before it was available to the general public– to talk a little about their experiences. This is what they had to say (with a few bits redacted to remove spoilers!).

GM Darcy Ross says, “I ran the Violet Vale for four members of my rapidly-expanding home group cypher system aficionados before GenCon, then ran it for six strangers at GenCon, as the first con game I’ve ever ran.

Into the Violet Vale brings players quickly from what feels like a more “classic” escort mission to the weird that is Numenera. The adventure has good flavor and wonderfully bizarre NPCs, but I also found that it has some open space to inject my own creative grace notes on the area, NPCs, and critters, which helped make it a little more my own without giving me extra work. The adventure also seemed to lend itself to a pretty exciting currently unwritten sequel, as my players were left with some interesting motivations at the end…”

Keith Stuckmeyer, who ran the adventure at Gen Con had six new players, including two who hadn’t played Numenera before. He says, “I think the thing that was most fun for the group was how the game was ‘set up’ to go one direction, and changed direction quickly into something unforeseen. Several players really enjoyed the oddities of the setting and enjoyed working with them (the [blank] that made the loud sound was a hoot at the Con).”

Brandon Ording has run the adventure nearly half a dozen times so far. “Between Gen Con and Dragon Con, I’ve now run this adventure six times, and each time it’s been a blast! The adventure is so open-ended that each group got to experience things in a different way. The best part of running this adventure is seeing the players’ reactions when they begin to realize what they’ve stumbled into. As one of the groups I ran it for discovered firsthand, splitting the party can be a really bad idea!” 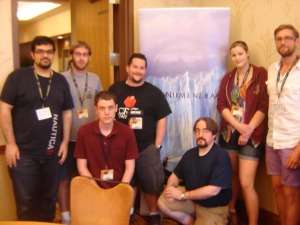 Andrew Marlowe also ran the adventure, both for his family (with three players) and at Gen Con (with six players). “This is a great adventure! (And it’s good for all ages.),” he says. “What I’ve really enjoyed is the freedom Into the Violet Vale gives the GM. Without getting into spoilers, this is a simple sandbox style adventure that drops the PCs right into the thick trouble from the get go… The Vale itself has some pretty wicked surprises for the PCs.

While the adventure does feature a few vital set piece encounters it is largely open for the players and GM to play in together. Each time I have run it my various groups have approached problems very differently and that kept it interesting for me too despite having run it before. I think it’s incredible to have a short adventure like this play so differently each time and still be the same basic story and then do so in a four-hour convention block. Furthermore if I were to run this as a part of a larger campaign, there are several ways to expand the scenario just based on the material in the adventure.”

Whether you want to run a quick one-shot or throw this into the middle of a longer campaign, Into the Violet Vale is a great way to add some extra weirdness to your table!