The Spirit of Numenera 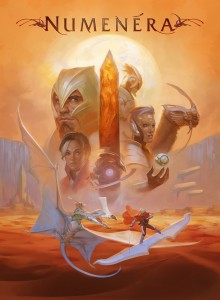 In conversations over the last few weeks, I’ve found myself talking about Numenera to interested people–not so much the rules, or the setting, but the essence of the game.

When I was a teenager, I played in a 1st edition AD&D game run by my friend Jay. Jay passed away recently and his loss from my life is pretty profound. Anyway, during that first game, we were about to play Decent into the Depths of the Earth (although we were going to start with the last portion of the G3–you old timers all know what I’m talking about). I created a character–named Malhavoc, by the way, if that rings any bells–and Jay told me that Malhavoc knew the truename of some super powerful demon lord and I could call upon him once to do my bidding. I knew this power was way out of my weight class, so to speak, but it was something I could only do once, so it wasn’t going to throw the whole campaign out of whack.

Obviously, this is well outside the rules of AD&D. Looking back 30 years later, I strongly suspect that Jay had no rules for how this would work. No stats for the demon lord. But since I could only use it once, that stuff didn’t matter. It was a get out of jail free card. It was a “you get to do one really cool thing at some point” benefit. It was a “use your imagination on this one” ability.

And by which I mean it was awesome.

Cut to many years later. I was running a campaign called “The Wall” using the Rolemaster rules as a basis, although so heavily house-ruled and jury rigged that I might as well just say I was running a campaign in a game called “The Wall.” My friend Bruce had a character who, every once in a while, could use his sort of zen-like, monk-ish concentration to alter reality in a creative way. He would basically spend some points from a pool and tell me what he was trying to do. I would consider the task at hand and the points he was spending and assign a percentage chance for success, and he would roll. (I would, on the fly, assess a sort of graduated success mechanic if possible, so that sometimes he would achieve part of what he wanted, often with interesting results.)

Again, this was awesome, and led to all sorts of amazing situations that never would have occurred if we’d allowed ourselves to be overly encumbered by strictly codified rules.

Cut to many years after that. I was running a 3rd Edition D&D game set in Ptolus. Now, 3E’s strengths come from its exhaustive definition of, well, everything. And I had a major role in helping craft all of that. But it was important to me that there still be some undefined aspect of the game. So I instituted a hero point system. This system became codified in Arcana Unearthed (and Arcana Evolved) but at the table it was far less systemized. In fact, it was very much “you tell me what you want to use the hero point for and I’ll determine if it works.” The answer was usually “yes,” because hero points were rare and hard to come by, but if you were doing something really outlandish I’d give it only a chance for success (graduated, partial success results possible based on your roll). “Get out of jail free” cards. “Use your imagination on this” abilities.

Thus, it was sort of a synthesis of the first two examples. And I could provide a hundred more from my decades of roleplaying. The point is that these things provided room in the game to allow for both player and GM imaginations to take the stories and scenarios in new and sometimes crazy ways.

Which finally brings me back to Numenera. Numenera’s rules don’t work like any of the above examples. But the spirit of the game–the essence–owes a great deal to these experiences. Numenera is about imagination, ideas, and stories. The rules exist only to service these things, and when they’re not needed they get out of the way. Which means, among other things, that there aren’t rules for things that don’t need rules.

Someone I was chatting with about another game system told me about a high level character who got a wizard’s tower, but the group was stymied because there were not rules for wizards’ towers anywhere in their game. The very idea that they might do something without a codified rules system was inconceivable. Numenera is built around a very different approach.

If I’m the GM and I decide that there’s a fat old woman running a shop that sells weapons and armor in a particular town, I don’t need rules for that. She’s just there. I don’t have to check a rulebook to find out how many children she has running around the shop annoying customers, how many rooms she has in her apartment over the shop, nor how many shelves of gauntlets she has. The GM creating that (often on the fly, but sometimes ahead of time) is, to me, just a part of the rpg experience. It’s the imagination engine–rather than the rules engine–that drives the whole game.

There’s nothing wrong with rules for stuff like that, but the game moves faster–and provides space for far more creativity–without them. Rules shouldn’t get in the way, slow things down, or encumber the game. They shouldn’t prevent amazing and cool things from entering the story. Maybe that fat old woman has an uncanny ability to spot shoplifters in her shop. Maybe the kids are actually her eyes and ears that way. Or maybe she’s psychic. There’s no rule for either case, it’s just the GM inserting his creativity.

I do my best in the GMing chapters (plural) found in the Numenera corebook to provide a lot of advice and instruction for running games in this way. (If that alone is something you’re interested in, I daresay the GMing chapters of the book might be worth it to you on their own.) But a GM utterly paralyzed without instructions and subsystems and forever unwilling to create that kind of stuff on his own probably wants to play a different game.

I recently had to tell someone (because I prefer to be honest) that Numenera probably wasn’t for him. He wanted something that was very systemized with rigid simulation, little GM adjudication, and precise quantification for everything, and that’s not Numenera. But honestly, I think that people who want to play an rpg who aren’t willing to let the imagination engine drive their experience are in the minority. Many of you reading already play this way, and have since forever. Those of you who have been relying entirely on rules may find it refreshing and freeing to focus more on an imaginative playstyle.

As of this writing, you can still preorder the print version of Numenera as well as the Player’s Guide and get the ebook versions for free. It’s a good deal. I hope you’ll give it a try.