Two weeks ago, Shanna and I visited Kirwan’s Game Store in Catskill, NY, as a part of our fulfillment of the ULTIMATE RETAILER Kickstarter rewards.

I will admit that Kirwan’s took me by surprise. It has a rather unassuming entrance on the main street of a small upstate New York town. As soon as one steps through the door, however, everything changes. First off, the store is huge. It is likely the largest game store I’ve even been in. Not only is there a large, clean, well-lit retail area, but there is room for literally hundreds of people to play games at once at dozens of tables. While we were there, there were multiple large card game events and tournaments going on there.

Secondly, the store is beautiful, with original Magic: The Gathering murals on the walls, tasteful decor, and a glass case with special items (including, now, a signed deluxe version of Numenera).

We gave an introduction to Numenera and then fielded a number of questions from an audience of about twenty people. After a book signing and a short break, both Shanna and I ran sessions of Numenera in yet another huge room of the store that we had to ourselves. 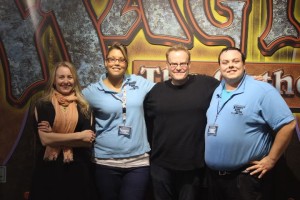 It all went very well. The people were enthusiastic, and the games were really fun. None of the players had played before, but a couple had read the rules. You can read more about our visit in this article in their local paper.

Kirwan’s is a great store. The people working there are excellent, and the store is everything you’d want it to be. Absolutely an “ultimate retailer.”