I don’t always use props when I run an RPG because at their heart, tabletop RPGs are about evoking a world of imagination through the spoken (or written) word. That said, why make imagination do all the work? Descriptions can always be spiced up, anchored, and otherwise enhanced by something you provide your players that makes them feel more in touch with what you’re describing.

I’ll go further: you should consider adding some props to your game if you’re not already doing so. Props engage players in a new way, engage several senses at once, and make a game more memorable. If you already use props, you’ve probably already tried many of the props described below, and probably some I haven’t thought of. The thing to keep in mind about props in RPG games is this: use them judiciously, not constantly. If players come to expect a certain kind of prop because it’s what you always do, that moment of excitement for each new prop reveal becomes less over time. The answer might just be in varying the kind of prop you use.

“You see this,” is such an obvious use of props that I doubt I need say much about it; you’re probably already using pictures as props yourself. Appropriate props for GMs include illustrations of interesting or scary NPCs the characters have just met, creatures about to attack the PCs, wondrous locations where the PCs find themselves, and other scenes to help sketch in a particular event. 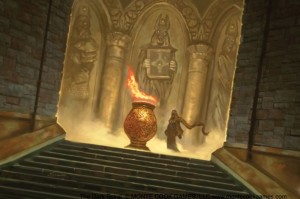 Before I GM, I sometimes gather pictures from Deviant Art and other online sources  suitable for the adventure I’m using, and make them available as a series of URLs. This works great in real life if I have a tablet or other surface to display the picture, or if I’m GMing a game online via a video chat or on an online virtual table like Roll20. (Of course, if I’m GMing a published adventure that contains pictures already designed to be shown to the players, I’m already good to go. The “Show ‘Ems” in all the MCG printed adventures–The Devil’s Spine, The Dark Spiral, and the forthcoming Weird Discoveries–are a great example.)

Do you use soundtracks to set the mood for your games? I don’t usually, but I always appreciate it when my GM does it. I know some GMs have a rotating playlist, depending on the game and mood they’d like to evoke. Movie soundtracks often make great RPG game soundtracks. A perennial favorite is the original Conan movie soundtrack, but I’m guessing that the soundtrack to the more recent film Gravity would also work great many situations.

Some GMs also use software that creates specific sounds or sounds, along the lines of, “You hear this,” which can also be quite effective. Various RPG sound mixer programs, online sources, and apps exist that provide this experience. The right scoundscape can suggest specific locations of all sorts, such as being on a ship at sea, riding the bus, standing on top of a windy tower, and so on.

Other GMs tell each player to pick a song that typifies their character, then adds those songs to a much larger playlist of songs. Then whenever that song comes up during play, the associated character gains a special bonus. Aren’t house rules grand?

As far as I’m concerned, miniatures are props. Props that some RPGS, like many editions of D&D, have pretty much required, but props all the same. If you never use miniatures, consider pulling some out for a particularly tactically important fight–it could be fun! For instance, I well remember the first few games I played where miniatures were introduced. Up to to that point, our group relied completely on theater of the mind. If you already use miniatures in your game, you probably already spend quality time choosing cool new minis for upcoming opponents with which to make your players ooh and ahh in fear and fascination.

Terrain goes with minis as naturally as pencils go with paper. All manner of terrain is possible, including dry-erase pads the GM sketches out a particular encounter on, to pre-printed 2D maps that come with some adventures, all the way to 3D terrain available from several manufacturers, allowing a GM to construct actual models of the environment. Some GMs go further, and craft intricate models of the environment the minis will appear within, which are nothing less than amazing feats of art in their own right.

Some GMs, such as our very own Charles Ryan, find minis just as valuable in non-tactical scenes as in tactical. Not to codify specific positions, but just to create a point of focus on the table and a visual reminder of which characters/NPCs are present in the scene. Which reminds me: I use the same tactic when I use online virtual tabletops–I don’t track players by their individual minis, but instead provide a points of focus for players on the screen that contains a map or other player area.

Sketches on the Fly

Yeah, this suggestion isn’t a prop, it’s a method for producing props quickly. Lots of GMs have some kind of white board or other sketching medium nearby so that they can provide additional references beyond merely their words for the shape of a building, how a particular artifact the characters just found generally looks like, or a rough map of a location the PCs must pass through. If you don’t have the ability to bring a whiteboard to your gamespace, even a quick sketch on a piece of paper that you can pass around to your players can be helpful in communicating a concept.

Yes, even the environment can be a prop. Every so often, changing where you normally play is a great idea. This can be as simple as sitting in the living room instead of around the table. But you can take it much further, especially if you have the time and the right scenario to set something up ahead of time. If you have a dark basement or rickety attic that you can access, consider twisting a particular scenario you are running so that it takes place in just such a place. Then when you move the game to the attic, players will feel like they’ve been partly translated into the game itself.

I know, not everyone has an attic. If you can’t go to the attic, “bring” the attic–or wherever it is you want to play–to you. For instance, if attic is your choice, add a few objects that might be found in an attic to your regular play space. If you turn the lighting down, put a tatty old blanket over the window, and pile some boxes, old letters, photograph albums, a broom, and a stack of newspapers around the room, it’ll feel very much like an attic. Bonus points for an old baby crib.

One last anecdote on the topic of changing environment by evoking an otherwise difficult to reach environment to your game space: Monte and I once co-GMed a Cthulhu adventure where we did this. At one point in the adventure, the group split, and half stayed on a ship (the table) and the other one went down in a submarine (a room in the basement). Prepared ahead of time, we gave each group walkie-talkies with which they could communicate. We had a small aquarium set up in the room meant to simulate the submarine, and other props set up to evoke the sea (including reduced lighting–characters each got a flashlight to look at their character sheets). And when the screams started coming in over the distorted, crackling connection offered by the walkie-talkies, it was magic.

Special objects is a huge category. Special objects include physical items you give to your players that represent actual objects that characters find in the game. The sky’s the limit when it comes to what you can provide players; well, the sky and whatever objects you have available to you. The following list of objects is in no way exhaustive, but might spark some ideas for items you have around the house or can get your hands on that might serve as a fun special object:

Handouts are special objects that usually take the form of letters, documents, yellow stickies, newspaper clippings, and even dossiers. When a character finds a letter or a document in game, handing the player that same letter or document you’ve prepared ahead of time across the table is a relatively easy way of really driving home the ‘reality’ of the session. I once played in a game where the GM (guess who?) was really great about providing just these sorts of props, so much so that I had an entire briefcase filled with them. Sadly, someone broke into my car and made off with that briefcase. Given that the game was a modern day Lovecraftian campaign where the end of the world was fast approaching, I can only wonder what the crooks made of the briefcase’s ominous contents.

Preparing a letter or a document is as simple as printing out something on your computer, though you can go further. For instance, in one game I ran where characters found an NPC’s journal, I first heavily weathered the journal by pouring wine on part of it, burning part of it, dripping wax on it, and so on, to give it a more authentic feel of something that had survived several adventures.

Speaking of preparing props ahead of time, take a look at The Estate Dossiers (just published as a fractal). This collection of documents is designed to be printed out as needed, maybe tossed into a manila folder, then given to players when their characters ransack an NPC’s office, or because as an operative of the Estate, a particular dossier is part of their mission briefing. The entire package also contains blank Estate letterhead for you to create your own Estate dossiers and other communications, as well as a template for an Estate ID badge. Each dossier has a different ‘voice’ depending on who within the Estate wrote a particular document, which goes even further in giving the documents a feel of authenticity. I hope you’ll give it a look for your games of The Strange! 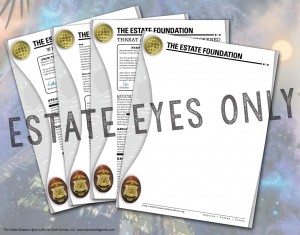 This entry was posted in Cool Tools,Game Better,GM Better. Bookmark the permalink.