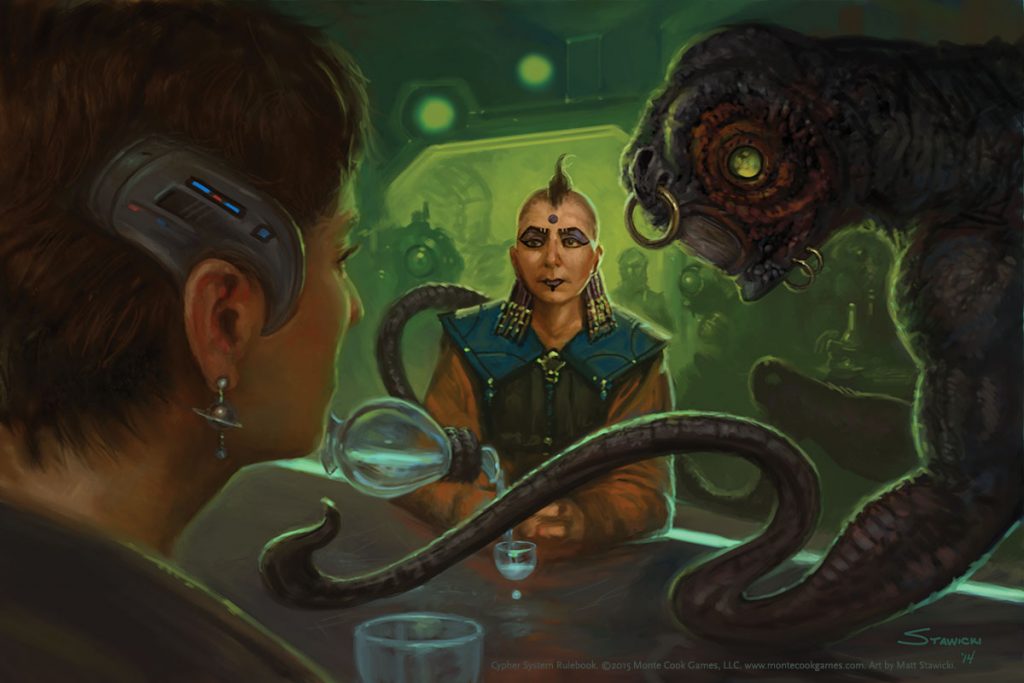 Perhaps one of your existing players moved away and had to leave your game. Or maybe there’s someone at work who’s just been dying to try their hand at an RPG. Or one of your player’s roommates loves roleplaying and wants to join your group.

Whatever the situation, every established group hits the point where it’s time to add new some new blood. But that’s always tricky, isn’t it? What if personalities don’t mesh? What if the new person feels left out because of all the history between the existing players? What if everyone is super shy around a new person and the typically boisterous roleplaying just shuts down?

As with almost everything in life, a lot of those concerns can be alleviated with a little preparation.

Remind Your Existing Players of the Table Rules: I don’t mean the game rules here, but whatever rules your group has established and agreed upon regarding table culture. (If you don’t have these, now’s a great time to make them. They consist of things like dealing with player conflict; acceptable language, gore levels, topics and themes; and any additional guidelines for interactions.) Reminding the other players gets everyone on the same page so they can help the new person understand the table culture.

Then, you’ll want to go over these again the first time the new addition joins you at the table (or before, if want to give them a chance to ask questions and voice concerns in private).

Give the New Player (and Your Existing Group) an Exit Strategy: Groups are dynamic, ever-changing things. So, it’s possible to do everything “right” when bringing in a new player, and still have things go awry. That’s not necessarily anyone’s fault; it’s just what happens sometimes when you gather a group of passionate, creative people in a room. Explain up front that this is a trial invitation, for both the new player and the group, because you want to make sure that everyone is a good fit. Don’t put everything in the new player’s lap—“In case you suck…” Frame it as it truly is—that gaming is a social activity where the group culture and the interaction between the players is important, and sometimes people don’t mesh. This gives the new player a way out in case they decide the group or the game isn’t for them, and it creates realistic expectations. It’s a hard conversation for many people to have, but better now than after six sessions of trying (and failing) to make a poorly fitting group gel.

Consider a Meet-and-Greet First: Whether this is just a short gathering that takes place before your first game together or a separate event specifically for socializing, a get-together of some sort without any gaming involved is a great way to introduce the players to each other and make sure that everyone gets a chance to make a connection with the new player. Talking about shared interests—books, movies, food, whatever—opens the door of communication and lays the groundwork for positive future interactions.

Explain, Explain, Explain: Both the GM and the existing players should be ready for the first game with a new person to be at least partly a teaching session. Don’t assume that the new player does or doesn’t know things; it’s easy to accidentally confuse a player if they know less than you think or to bore them if they’re already up on the rules. Just ask. “Have you roleplayed before?” “Have you played this game before?” “What questions do you have so far?”

Take extra time wherever they need it. For some, that might be character creation. For others, it will be the rules. Or maybe just the culture. Beginners might need help with all (or none) of these things. Teaching is the purview of both the GM and the players, so everyone should feel encouraged to help the new player out when they can.

Use Existing Relationships: Often a new player arrives via a previous connection with another player. It might be someone’s partner, roommate, best friend, or co-worker. Finding ways for these two characters to work together in-game isn’t cheating; it’s a great way to help the new player get a feel for the world and their character.

Get Everyone Involved: The task of incorporating new players into an existing group shouldn’t just be the purview of the GM. Players should make sure to include the player (and their character) in scenarios, to get them up to speed on history or future plans, and to help them out with in- or out-of-character questions. It’s possible that your existing players are just as nervous about this new addition as the new addition is about them. Inviting them to be the new player’s guides can help alleviate some of that.

Talk to Your Players After the First Session: Consider touching base with everyone privately after the session to find out how they think it went. This isn’t a gossip or a bitch session; it’s a chance for players to feel heard and to voice both the things they might be excited about and any concerns they may have. Do this with the new player too; often new players feel overwhelmed and nervous that they might have screwed up or that the other players didn’t like them. This is a good chance to tell them anything that you thought worked well with the group.

One of the great things about adding a new player to your group is that they can bring a whole new energy and way of looking at things. Setting them—and your group—up for success presents a great opportunity for even more amazing games and experiences in the future.