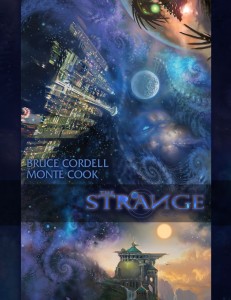 If you’re one of our Kickstarter backers, or you follow The Strange on Facebook—or are just a generally well-informed gamer—the fact that we’re releasing a new RPG called The Strange in August won’t be much of a surprise. But we thought we’d officially make all the details public today, in honor of The Strange creator and co-designer Bruce Cordell’s birthday!

And we’re giving a little gift to you as well–more on that just below.

First, here’s the full scoop on The Strange:

Beneath the orbits and atoms of our natural universe lies a network of dark energy. Those who have learned to access and navigate this chaotic sea have discovered an almost endless set of “recursions” in the shoals of our Earth: Worlds with their own laws of reality, reflected from human experience or imagination, given form in the swirling Chaosphere of the Strange. Worlds teeming with life, with discovery, with incredible treasures, and with sudden death.

Worlds sometimes jealous of our own.

The secret plunder of these worlds draws the brave, the daring, and the unscrupulous—and it draws dangerous enemies from these recursions back to our Earth.

And slowly but inexorably, it draws the attention of beings from beyond Earth’s shoals—beings of unfathomable power and evil from the unknown reaches of. . .

Monte Cook Games is thrilled to announce its next big tabletop roleplaying game: The Strange! Written and designed by Bruce Cordell and Monte Cook, The Strange is a game that crosses multiple worlds, called recursions, which player characters can explore and defend. In The Strange, your characters change with each world they travel to, taking on new aspects suited to help them function in that recursion’s unique laws and structures. But dangers found in these recursions threaten not only characters, but also our very own Earth. If characters persevere, however, they can not only save themselves and Earth, they may even gain the ability to create a recursion of their own!

If you enjoyed the inspiring scope of games like Planescape, Gamma World, or Numenera, or mind-bending scenarios like Moorcock’s Eternal Champion series, the TV show Fringe, or movies like the Matrix, you’re going to love The Strange.

The Strange was funded by a Kickstarter campaign in the autumn of 2013, and will be released in August 2014. The corebook will be a 416-page hardcover with a double-sided poster map, heavy on the premium-quality artwork. If you’ve seen the Numenera corebook, you’ll know what to expect: The format is very similar (except we’re doing the poster map double-sided).

In addition to the corebook, The Strange will launch with the 96-page The Strange Player’s Guide–an inexpensive introductory guide to The Strange that features everything players need to generate characters, learn the basic rules, and get a solid look at the setting. 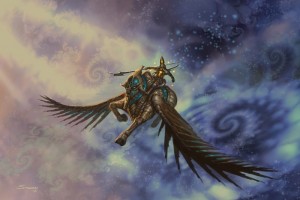 And now, that little gift we promised!

To further celebrate Bruce’s birthday, we’re opening pre-orders for The Strange corebook and The Strange Player’s Guide today. If you missed the Kickstarter, we have a pretty good deal for you: Pre-order the print version of the corebook and/or Player’s Guide, and we’ll throw in the PDF of that title for free. This is a limited-time offer, so don’t delay.