Your Game: Make a Creature in Ten Minutes or Less

One of the main reasons I love GMing the Cypher System is the low prep time needed to create a memorable encounter. While preparation in most games focuses on stat blocks, Cypher System preparation focuses more on cool ideas, descriptive details, and player handouts and props. When it comes to Cypher System stat blocks, I can make a playable creature or an NPC in just a minute or two, but if I have more time I like to layer on additional details that make the creature or NPC more fun. Here’s what I do, based on how much time I have to devote to making up a creature or NPC:

2 minutes: Think of a cool concept and a brief description. Decide on the motivations and potential tactics of the creature or NPC. Assign it a level. Done and dusted: you have a fully playable creature or NPC!

4 minutes: Come up with a clever GM intrusion relating to the creature or NPC, to use when one of your players inevitably rolls a 1—or you need a twist. (You can speed this up with a little inspiration from the Numenera Intrusion Deck.)

6 minutes: Give the creature or NPC a signature tactic, and a special ability that reflects that tactic. While you’re at it, add one specific detail to the description. Look for something that conveys the essence of the creature’s or NPC’s purpose in your adventure—if it’s supposed to be creepy, detail exactly what form the creepiness takes, for instance.

10 minutes: I rarely spend this much time on a single creature or NPC unless it has a recurring role in my adventure. With this extra time, add a second special ability and more descriptive detail. Maybe even a third, but don’t go overboard. A creature or NPC probably won’t get a chance to use four or five different special abilities, so spending the extra time to pad the list may be time poorly spent. 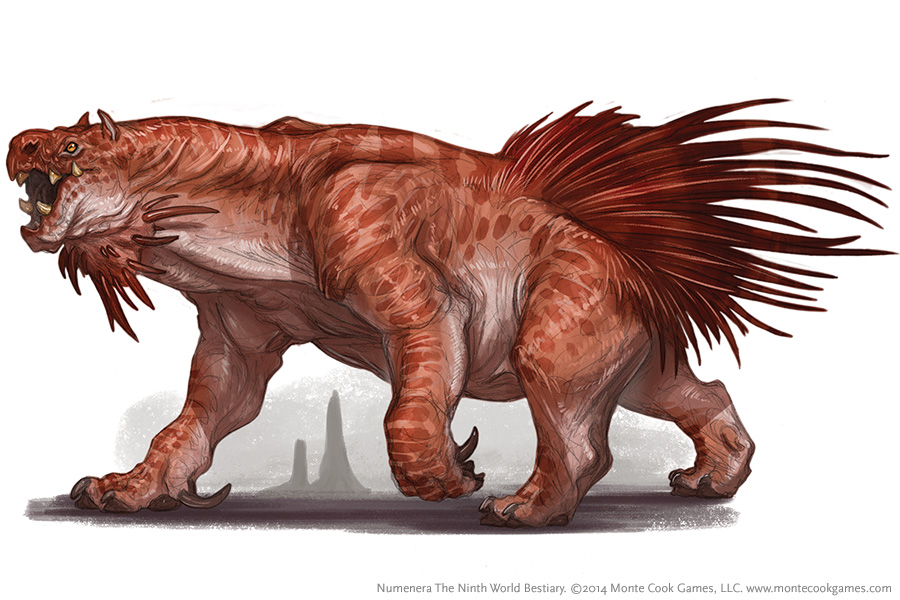 If you have more time and the creature or NPC is likely to be faced in combat, here are some factors to keep in mind as you tinker with them further. These are rules of thumb, but are still really useful to keep in mind.

And that’s it: two minutes to stat out a creature if you don’t have much time; ten minutes max if you want to go all out.