Matt Colville’s Essay from Your Best Game Ever

The awesome Matt Colville, one of numerous consulting experts on Your Best Game Ever, wrote this essay for the book:

How Does [Your Character] Feel About That?

New players and even many experienced players aren’t used to expressing themselves through their characters (or even, depending on your players, at all). In other words, when dope stuff happens in your game, it’s not unusual for players to just sit there, expressionless, waiting for the opportunity to use some ability on their character sheets. The GM then feels frustrated because it seems like the players aren’t “playing.” What we really mean is they’re not reacting.

This is natural! It doesn’t mean they’re bad players—they just need a prompt. So give them one! It’s perfectly reasonable for the GM to literally ask a player, “How does your character feel about that?” or “How does your character react to that?” In my experience, players respond very positively to these questions. They are waiting for an opportunity, they want an opportunity, but they just don’t know it.

Once you get the ball rolling, you’ll discover these questions actually remove a huge burden from you as a GM. Before, you were doing all the work. But, with some well-placed questions, you can spark a conversation that gets the players talking for twenty minutes! Making it much less likely they’ll grind through all the content you had prepared for the next month in only a few hours.

It’s pretty common when starting a new adventure or campaign for the GM to ask the players, “What does your character look like?”

Each player then gets a chance to describe their PC visually. Try also asking them, “What kind of attitude do you give off?” We want to know not only how they look, but how they seem. You can do this any time. If a PC approaches an NPC, you can ask, “Does your character seem threatening?” Or curious? Or friendly? Before you asked, the player might not have thought about this. Once you ask, they have to think about it, and this is the beginning of roleplaying.

There are larger questions you can put to the entire group. “Do you folks intend to let this creature go?” You can take anything, any issue, and frame it as a question. Once you’ve done this a few times, you can take some incredibly leading questions and phrase them in such a way that they sound like perfectly reasonable things for a neutral game master to ask, and the players won’t realize they’re being nudged into focusing on the things your adventure needs in order to keep pacing and drama engaging.

Asking players direct questions about their characters can drive an entire campaign. And eventually, some of your players will get used to describing, unprompted, their reactions, their intent, how they seem. Which not only makes a much better game, it also makes your job a lot easier.

If you found Matt’s essay enjoyable or useful, you can look forward to similar contributions from professionals throughout the game industry, including:

Each of the consulting experts contributed essays like Matt’s. But they also did far more: each was asked to read and comment on the text before it was finalized, ensuring that Your Best Game Ever reflects not just Monte’s best advice, but insights from game professionals across the industry.

Matt’s essay was inadvertently left out of the print version of Your Best Game Ever. (More accurately, the essay by the also-awesome Ajit George was included twice—once in its proper location, and again where Matt’s should have been.) If you’re a fan of our work, you know that we hold ourselves to a very high editorial standard, and this is not the sort of mistake you find in our products. Nonetheless, somehow this error made its way through our layout, editing, and proofing process, and wasn’t discovered until the print run was completed. It’s nobody’s fault but our own. The error has been fixed in the PDF, of course, but we’re sharing his essay here so that every reader of Your Best Game Ever—and indeed gamers everywhere—can enjoy it.

Your Best Game Ever releases in late July. Preorders are still open, and there’s a great preorder deal available. But hurry—preorders close in a few days! 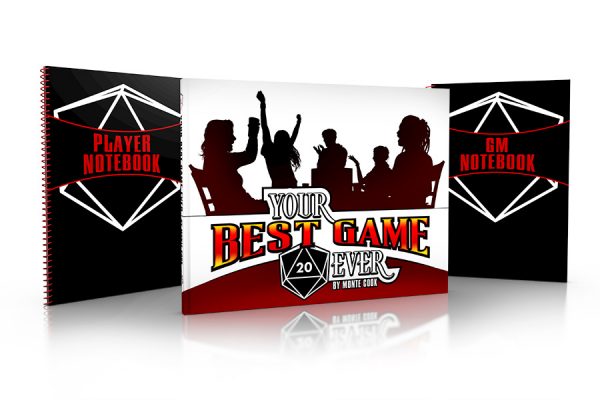