Beyond the Book: Large Battles in the Cypher System

The other night I ran an encounter where the Player Characters were tossed into a huge arena. The four PCs were hastily teamed up with nine NPC allies to find themselves pitted against thirteen more NPCs and forced to fight to the death by a horrible tyrant.

If you’ve got experience in running games yourself, you might very well have a simple, understandable response to this setup. 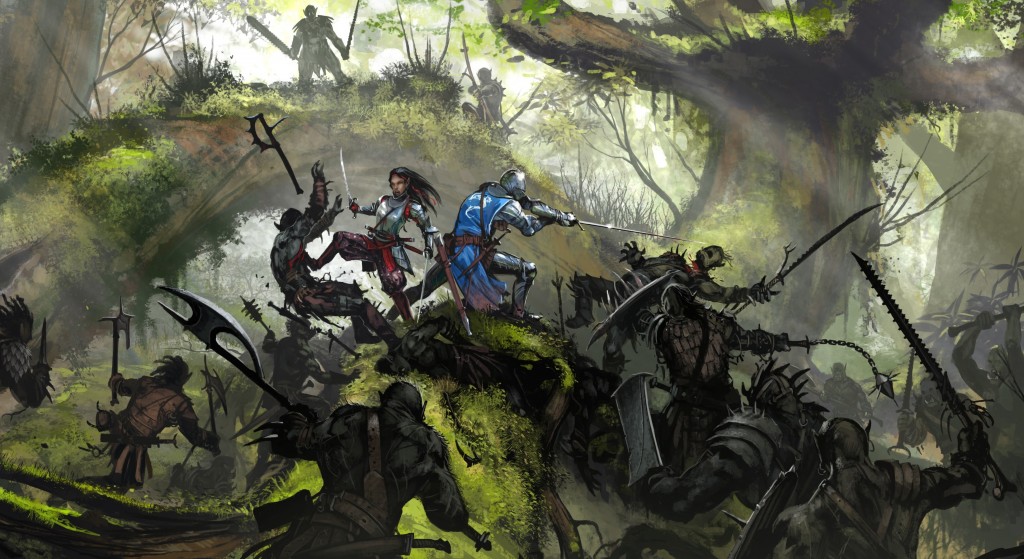 And often, you’d be right. A fight of thirteen versus twelve, with twenty-two total NPCs involved, could be a nightmare to manage. But the whole encounter went smoothly, moved quickly, and was wrapped up in under an hour. Here’s how I did it.

The encounter was intended to be very cinematic from the get-go. In a movie, you wouldn’t get to know and identify all twenty five characters involved. A movie would just focus in on a few major players. On one side, that meant the PCs (of course), and a couple of named NPC allies that hastily befriended them before the arena combat began. On the other, I provided details of a few particularly formidable-looking foes (because this was Numenera, the worst of them was a massive, multi-limbed crustacean-like warrior with multiple, massive clubs). Everyone else was less-specifically drawn, although a few mentions of “three guys in the back with javelins” or “two warriors with long spears charging ahead” gave some context and gave me the ability to put them in the forefront for a moment or two before they faded back again.

The PCs are always the main focus, of course. So I got detailed actions from the players, each time giving a snapshot of what was going on around them in the chaotic melee. This made it easy for players to play to their characters’ personalities. One acted mostly to protect those on his side. Another picked off the weakest-looking foes. Others attacked the strongest. One did whatever he could to stay well back from the danger. These actions shaped the battle as a whole.

Cypher System NPCs, of course, are very simple. Each is represented mainly by a single number. A few of the more detailed figures had Armor or a bit more elaborated stats, but honestly, I kept that to a very bare minimum. The big guy, for example, could attack multiple foes at once and tons of Armor. I knew it would come down to most if not all of the PCs versus him, in the end.

Much of the stuff that happened beyond the PCs’ control came about as GM intrusions. A sudden volley of spears from some foes, or a seriously injured ally about to be overwhelmed. The combat wasn’t about carefully matching NPC stats versus NPC stats. No one rolled for the NPC combatants. Unless an NPC was interacting with a PC, they weren’t given specific actions. The fight around the PCs was more like a dangerous environment than a proper battle. The PCs’ actions played the most important part of determining the outcome of the fight (the odds would have been slightly against the PCs’ side at the start, if the PCs were NPCs). To the players, however, it didn’t seem like a more “normal” combat encounter where it’s them against a few foes.

If this is something you want to do, my advice is this: imagine how you might run a combat with the PCs and their foes on rafts in a raging river. You’d run the fight normally, but occasionally make things dramatic and interesting using GM intrusions or even just constant hazards arising from the larger situation. Run the big combat exactly the same way, except rather than jagged rocks or overturning rafts, you’ve got a larger battle comprised of multiple foes. You’ve got the sudden appearance of “new” foes from out the general melee, bodies and weapons flying and falling about like terrible hazards, you’ve got allies in jeopardy, and you’ve got allies giving the PCs a hand. Each round should have some new turn of events, even as you describe—in general terms—how the battle goes. The players should always have an idea of how many foes and how many friends remain, just as they should be aware of what’s going on around them in any other situation. As ever, you’re their eyes on ears.

The long and the short of it is, it was a simple encounter to run, and one that was engaging for all involved. I’d happily do it again.