Welcome to the second installment of NaNewGaMo!

In NaNewGaMo we’re helping players who feel the urge to run an RPG—to become a GM for the first time—take the plunge. Whether you’re new to gaming or a long-time player who’s never happened to take the GM’s seat, we’re making the process of running your first adventure an easy one. If you’re just joining us, start with the first installment. Then join us every Tuesday and Thursday throughout January, and by the end of the month you’ll be a GM too!

In our last post, we introduced the idea behind NaNewGaMo (National New Gamemaster Month) and asked you to get your hands on a copy of Numenera. If you’re just joining the program, I recommend you go back and read that post. Then click your way back here and read on!

Today we’re going to delve into some of the specifics of preparing for your first session. Before we do, though, I want to touch on one topic:

Is It Always This Much Work?

We’re going to spend a month getting you ready for your first adventure. Eight blog posts, and eight activities, each of which might take you an hour or so—and that’s just for your first game session. Perhaps you’re feeling a little panic when you think that your first adventure could span two or three whole evening-length sessions. And it’s just the start of what might be a lengthy campaign! Is this really such a good idea???

Relax: It’s not always like this. We’re covering a lot of ground that you won’t have to cover again, and a lot of what we’re doing this month will soon become second nature to you. Being a GM does require some prep work, but it’s not too daunting, and how much you put into it is entirely up to you.

In my own campaigns, I find I might spend many evenings, perhaps spread over a few months, preparing for a new campaign. With that under my belt, each new adventure might take several hours of prep time, but the adventures usually run over several game sessions, for which I have to do little additional prep. (This work is all for adventures and campaigns I create from scratch, because that’s one aspect of GMing I happen to really love. When I run published adventures, there’s often half as much prep time—or less.) Every GM has a different experience, and every game system has different characteristics, but many GMs experience a long-term average of an hour or so of prep time per evening-length game session.

So, no, it isn’t always this much work! 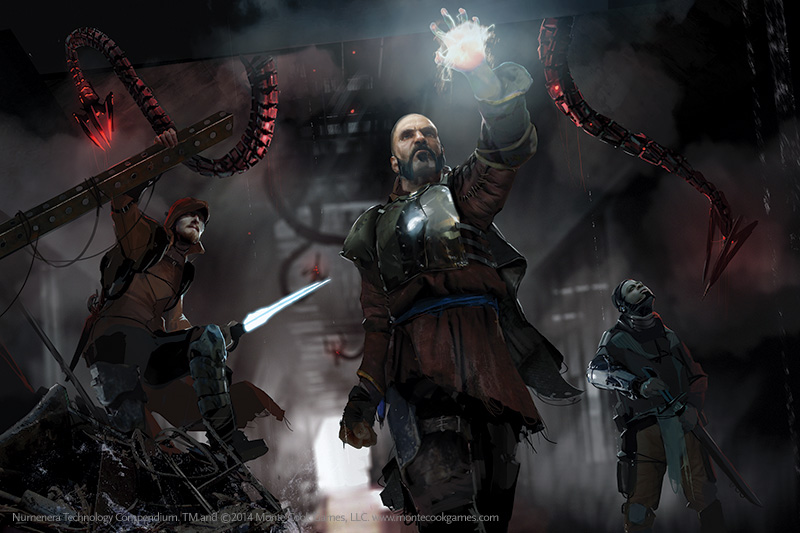 The adventure you’re going to run is called The Beale of Boregal. You’ll find it on page 367 of the Numenera corebook. We’ve picked this adventure because it’s a great introduction to Numenera for new players and it was designed to be particularly easy on GMs running Numenera for the first time. Feel free to look it over, but you don’t have to read it just yet.

Here’s what you do need to do now:

Choose a Time and Place

First, decide when and where you’re going to hold your first game session. I recommend the weekend of January 29th, because that ties in nicely with the NaNewGaMo syllabus. But if that doesn’t work out, choose a later date. And be prepared to be flexible, because obviously you won’t be the only one involved—you’ll need a time and place that work for your players as well as for you. Speaking of which:

Reach out to some potential players. Perhaps you’ve already been talking about this with some of your friends of family. Or maybe this will be a complete surprise to them. Either way, identify some people for whom you’d like to run the game. Four or five players is an ideal group size, but three to six is fine. You can run a game successfully with only two players, or even just one, but it’s a bit more difficult. And with more than six it can be very challenging to keep everyone engaged. (And sometimes just to fit them around the gaming table!)

How you go about it is up to you, but I recommend contacting about half a dozen people initially. That way, if everyone says Yes your group won’t be too big, but if a couple of people can’t make it, you’ll still have enough players. If you don’t get enough Yes responses from that group, maybe reach out to one or two more.

Tell the players you plan to run Numenera (you can tell them the name of the adventure if you like), and suggest your preferred time and place. A website like whenisgood.net can be helpful if scheduling is difficult.

Who should you invite? That’s easy: People you think you’ll have fun with. If you already have an existing gaming group, that’s a good place to start. If not, just gather some folk who you’ll enjoy spending several hours with (and who will enjoy spending a few hours with each other!). They don’t need to be experienced gamers, or experienced with Numenera in particular.

Do A Little Initial Reading

Finally, read Part 1 of the Numenera corebook. It begins on page 12 and runs for seven pages, so it shouldn’t take you too long. This section gives you a foundation regarding the world and the game system. (One quick note: In Chapter 2, the text is directed at “you.” It generally means the players more than the GM—for example, when it talks about “you” making rolls, that’s always the players.) There’s more to know, but we’ll tackle it as we go.

This is so exciting! You’re on your way—once you complete these activities, you’ll have committed yourself to your first game session. Don’t panic: It’s going to be great.

Today we’re taking the wraps off the NaNewGaMo forum, a message board you can log into and discuss your NaNewGaMo experience with one another, with me, and with members of the MCG Asset Team, our crack force of expert GMs who run our games not just for their friends, but also at game stores and conventions. They’re standing by to offer support and answer questions.

You’ll find the NaNewGaMo forum here. Please drop in, introduce yourself, and ask any questions you might have. (If you’ve used the MCG store before, log in using the same credentials you use there.) Be sure to bookmark it, so you can make use of this resource all month long. Expert gamemasters are standing by!

We’ll take our next steps on Tuesday of next week. In the mean time, it’s still early in the month and there are still gamers out there who don’t know about NaNewGaMo. Won’t you spread the word (use the #NaNewGaMo hashtag)? And here’s that social media avatar again, in case you missed it last time: 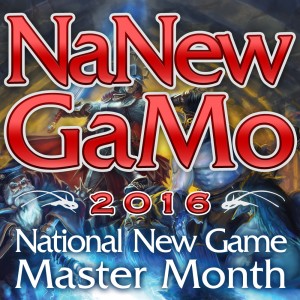