This is it: The final session of the New Gamemaster Month program! We’ve come a long way over the past few weeks, and we’re closing in on your first game session.

In New Gamemaster Month we’re helping players who feel the urge to run an RPG—to become a GM for the first time—take the plunge. Whether you’re new to gaming or a long-time player who’s never happened to take the GM’s seat, we’ve been making the process of running your first adventure an easy one. Our posts have run every Tuesday and Thursday in January; you can find the first installment here.

In this, our last part of the 2017 New Gamemaster Month program, let’s talk not about GMing, but about characters. Why? Because your first act as GM will be to shepherd your players through the process of creating their characters—a process that’s likely to take up a portion of your first session.

If your players are seasoned Numenera players, they’ll be familiar with both the process of making characters and the types of PCs that adventure in the Ninth World. If some or all of your players are new to Numenera, though, they’ll have questions. And they’ll look to you for guidance. You don’t have to be an expert on Numenera characters, but you need to be sufficiently conversant to be helpful to your players and keep the process moving along.

What kind of characters should your players make? That’s up to them. But it’s a good idea to have a variety of character concepts in your group. This is true for a couple of reasons. First, having a variety of strengths helps players successfully face a variety of challenges (or gives them options on how to approach challenges). This is practically codified in some RPGs—the classic dungeon-delving group includes a fighter, wizard, rogue, and cleric because you really need all those abilities to survive the dungeon. Numenera is a bit looser, though, so it’s no crisis if your party is heavy on Glaives (for example) and light on Nanos.

The other reason is you want to let each player have moments to shine. Imagine you’re playing a spy game, and the adventure involves stealthing into a high-security facility, a high-speed chase in a getaway car, and then a showdown with the thugs the opponents send after you. The character who’s great at defeating electronics gets a moment in the sun as you infiltrate the facility, the character who’s great with vehicles shines during the chase, and the tough special-ops soldier type shines in the fight scene. Everyone has a moment in which his or her character feels crucial. If they were all sneaky types, nobody really gets the spotlight in that first scene (or any of them, frankly) and you might struggle through those other scenes. 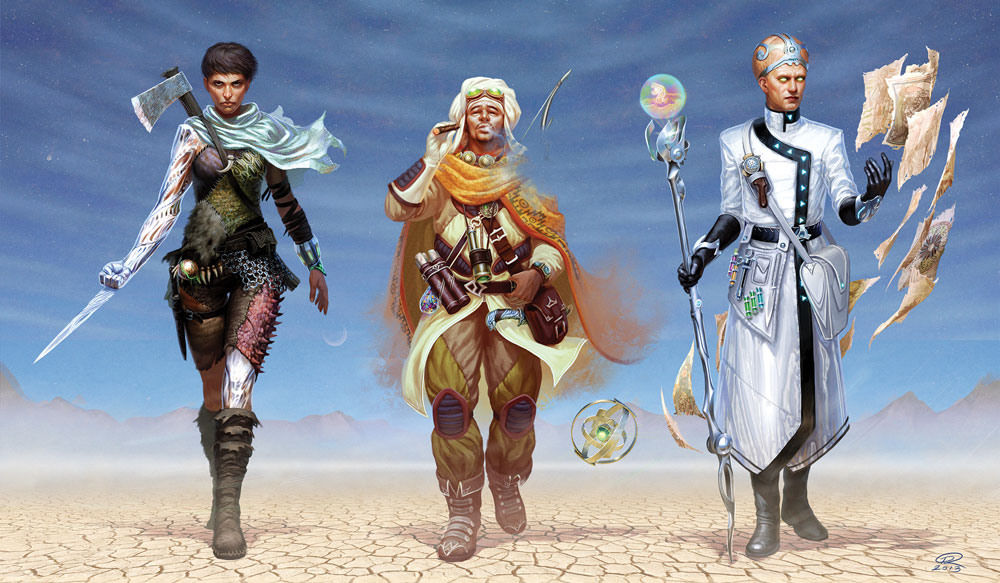 One particular issue you’ll have in your first session is bringing the characters together. Sometimes this process can seem contrived or stilted (the stereotype in fantasy games is that the players all happen to be at a tavern when someone with an adventure wanders in). Don’t sweat it. Your game will ultimately be about what the characters do once things get rolling, not about how they met.

Numenera has a nifty mechanism to help you out with this: Each character comes with a built-in hook that connects him or her to another character, and several options for a connection to the first adventure. The link to the adventure is part of the character’s descriptor, and the connection to another character comes from her focus. In both cases, the players have some leeway in how to interpret these connections. In your first session, after you make characters, spend five minutes or so discussing these connections, and you’ll find they really help players get into their characters quickly.

One last thing on the subject of characters: Often, players don’t know exactly what they want when they sit down at the gaming table. Sometimes once the game starts, a player finds that he doesn’t really like the way his character works, or that it’s not really what he had in mind. And sometimes a group dynamic emerges for which the characters, as generated, aren’t a perfect fit.

You know what? That’s natural. I recommend letting your players make adjustments to their characters after the first session. Just like a TV show that changes up a bunch of stuff after the pilot (ever watch the early episodes of the original Star Trek?), you’ll find that even if it seems odd at first, it makes little difference in the long run. And your game will be more successful if the players really love their characters.

There’s a lot of material in the character creation section of the Numenera corebook. Don’t panic: You don’t have to read too much of it. For the most part, it’s detailed information on the various abilities players might choose as they create or advance their characters, the bulk of which isn’t relevant now. What you do want do to, though, is familiarize yourself with the three character types, the function of descriptors and foci, and the general character generation process.

In addition to this reading, you’ll also want to lay in some drinks and snacks if you didn’t do so as part of Monday’s activity.

Relax. It’s going to be a lot of fun. You’ve done a lot to get yourself up to speed, and you’re ready. Check it out:

That’s it: That’s all the secret ingredients. You are ready. Go run your game!

What? More steps? Didn’t we just get to “Go run your game?”

Yep, but your first session isn’t the entirety of your GMing career. You’re going to have a great time, and chances are you’re going to run a lot more than The Beale of Boregal over the weeks, months, and years to come. And even if you don’t, that adventure alone may well run through more than one session.

So, here are some things to do after your first session:

Thanks for Being a Part of It!

It’s been a real pleasure putting this program together and presenting it to you over the past month. I hope you’ve enjoyed it, learned a little something, and gained the confidence to start running your own games. And more than anything, I hope you enjoy GMing as much as I have. Hopefully, it will bring you many years of pleasure. Congratulations!