New Gamemaster Month: Let’s Have a Look at the Adventure!

This is the fourth installment of New Gamemaster Month!

On Monday, we started digging into the rules of Numenera, and into its setting, the Ninth World. Developing a basic fluency in these topics—without sweating the details too much—gives you a foundation for keeping your game sessions flowing at a brisk and enjoyable pace, and allows you to form and run with your creative ideas and those of your players without the distraction of wrestling with unfamiliar rules.

So if that’s the foundation, what do we build upon it? The adventure, of course!

What Is an Adventure, Really?

An RPG adventure is a planned series of events that give a backbone to the story you, and especially your players, will unfold around the gaming table. As you develop your skill and experience as a GM, you might take great pleasure (as I do) in crafting your own adventures. Or you might prefer to save yourself the effort and use the many fun and imaginative adventures already created for your convenience. Many GMs do both—they run published adventures when the have little prep time or are particularly inspired by the adventures’ ideas, and they make their own when they have the time and inspiration to do so.

Creating your own adventures isn’t hard. The amount of work required varies from game system to game system but generally isn’t insurmountable. It’s a slightly different skill set than GMing in general, though, so it’s outside the scope of the New Gamemaster Month program. We’re going to go with a published adventure, to focus on the actual GMing process rather than the design process. As I’ve mentioned before, our adventure is called The Beale of Boregal, and you can find it on page 367 of the Numenera corebook.

Before you open the book, let’s talk a bit about what comprises an adventure. Adventures can be highly detailed or amount to little more than a few notes, but they all have a few things in common:

Those are the components of any complete adventure. They might take the form of a 96-page book with thousands of words of detail, along with dozens of maps and images. Or they might amount to a few scribbled notes on a sheet of paper. Either way can suit the purpose just fine.

So if those are the basic ingredients, what does it take to make a really tasty meal out of them? A great adventure: 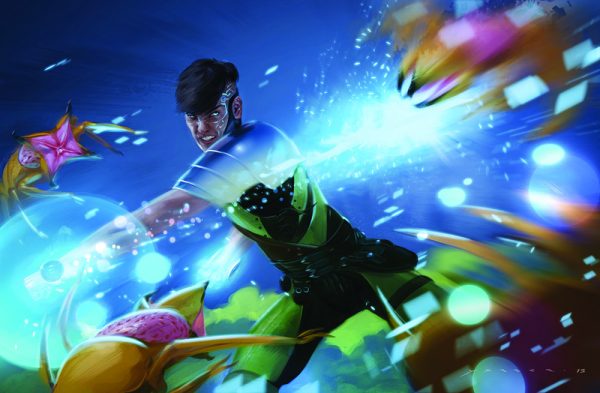 It’s time to get to the specifics of your first adventure as a GM.

As you read it, think about the elements I discussed above—both the fundamental building blocks and the factors that make an adventure fun and successful. See if you recognize those elements in the adventure. Maybe you’d like to hop onto the New Gamemaster Month forum and talk about them with our GMs and other folk, like you, who are exploring GMing for the first time.

And a Little Talking

But that’s not your only activity. As I said above, an adventure works best if it plays to the interests and expectations of the players. So have a chat with them. Ask them what they expect and want out of the game. Some players will be happy to go on at length. Others might not really know what they want, or be able to articulate it. In some cases, you may have gamed with the player before, and perhaps already have a good sense of his or her play style. That’s all fine. The goal here is to put yourself in a position in which you can best prepare for a game that everyone will find memorable.

Don’t press your players on this—many gamers don’t really care to think about a game too much before they sit down at the table with a blank character sheet in front of them. But if you have players who are eager to think ahead about the game to come, you might tell them about the Wandering Walk, and share some of the adventure hooks given on page 369. And of course they aren’t limited to talking to you—they’re welcome to discuss their character ideas with one another beforehand, too.

Let us know how it goes on the New Gamemaster Month Facebook group. And talk to you again on Tuesday!