For the past few months, I’ve been hard at work on Predation, our upcoming Cypher System game about time travel and dinosaurs.

Every day, scientists and paleontologists are discovering new species and learning new things about dinosaurs. Just in the time that I spent writing this game, a lot of scientific discoveries made. We proved that many dinosaurs definitely had feathers, some of which were very brightly colored. We learned that they might have cooed like pigeons. The first fossilized dinosaur brain was found. At least two or three brand-new dinosaurs were unearthed. And so much more.

It’s been difficult (but also delightful) keeping up with each new discovery in just the last few months. Imagine what it will be like after another hundred years of research, discovery, digging, and experimentation. How many new species of dinosaurs, flying reptiles, insects, and plants will be uncovered? What else will we learn about the Cretaceous and its creatures that we didn’t already know?

When you start thinking about it that way, it shows you all of the ways that the Cretaceous could be different from what we currently know about it. This is true not just of the plants and the creatures that came before us, but of the science and technology that will come after us.

In building the world, I started with known science—creatures, weather, plants, activities, and so on that are supported (or at least not contradicted) by fossil records—and then jumped off from there, extrapolating things that fossil records (or time travel, natch) might support in the future. 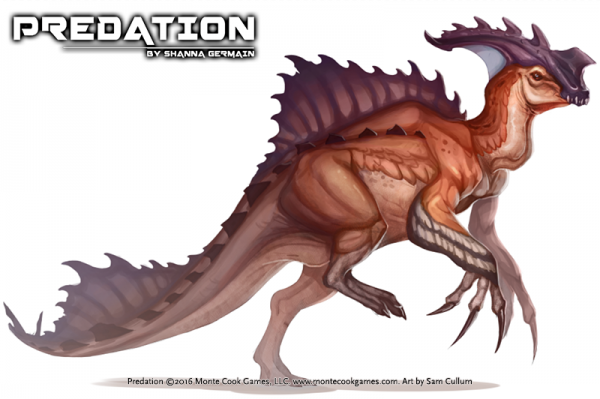 Along the way, I got to talk to some pretty awesome scientists about what they know about dinosaur poop, establishing a colony, and dinofuzz. (Note: These aren’t their exact answers—theirs were much smarter and more thorough.)

Q: Is there a scientific name for dinosaur poop?

A: Coprolite, but only if it’s fossilized. Otherwise, it’s just dung, poop, excrement, or turds. Or “dino dumps.” Also, there is such a thing as a paleoscatologist.

Q: Were there poisonous plants in the Cretaceous?

A: Yes. It’s believed that a version of Dutchman’s pipe was around then (and is still around).

A: We think many of them could, yes. Based on scuffles we’ve found at the bottom of what was once a lake, we think even creatures like T. rexes could and did swim. Other dinosaurs likely waded, using their front legs to walk, while their hind legs floated behind them.

Q: Could a modern day human survive the Cretaceous period?

A: Turns out, yes. Mostly. Depending on the season, location, and whether you eat meat (there were some fruits and mushrooms, but not a ton).

Q: Where there spiders in the Cretaceous?

A: [This answer intentionally left blank due to a spider phobia of the editing team. (whispers “Nephila jurassica”)]

Q: How many people would you need to establish a colony on Mars (or, say, in the past)?

A: Dinofuzz is one of my favorite things! We know that lots of species that were related to early birds, like the Microraptor, and even tyrannosaurs were fuzzy or fluffy. But my favorite is probably the Tianyulong, which essentially has a giant Mohawk that stands up along its neck, back, and tail. It’s amazing, and I love it.