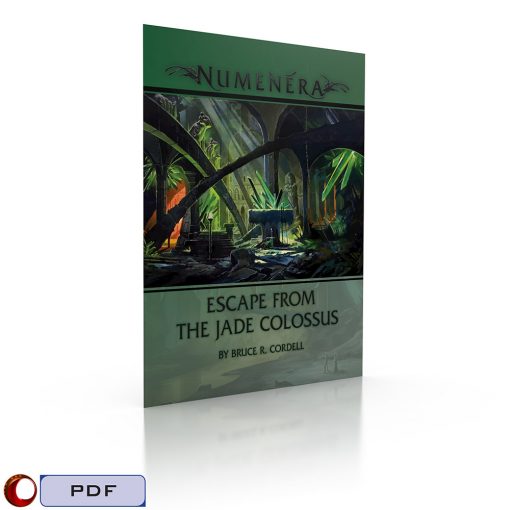 Escape from the Jade Colossus

Trapped in a prior-world ruin!

Five years ago, a hidden prior-world installation woke up after aeons of somnolence. The night of its awakening, the land screamed and shuddered. After the tremors subsided and the day crept back, something enormous was revealed: a massive new structure, many miles in diameter, had burst up through the ground. It had been expelled to the world’s surface—or did it move under its own power?

A dangerous contagion in Ballarad has led the PCs into the Jade Colossus, where the healer Gerob knows of key ingredients to a cure. But when a collapse blocks their escape route, can the players find their way out of the massive structure? And when Gerob becomes more a liability than an ally, is there any hope of bringing the cure to the stricken city?

Escape from the Jade Colossus was the official Numenera adventure for Gen Con 2017. It begins in media res and includes pregenerated characters, making it perfect for one-shot use—but it also introduces the massive structure detailed in Jade Colossus: Ruins of the Prior Worlds, and is easily adapted into campaign play.