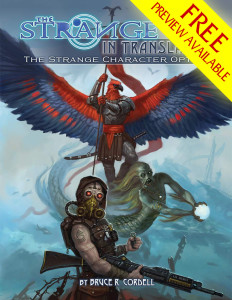 In Translation: The Strange Character Options goes on sale in just over a week. I’m really proud of this book, and I think you’ll have a lot of fun using it in your campaign.

But it’s not the only source of great foci, descriptors, and character abilities for use in The Strange. Both The Strange and Numenera rely on the Cypher System, and that means that a lot of the stuff made for one game works perfectly in the other. 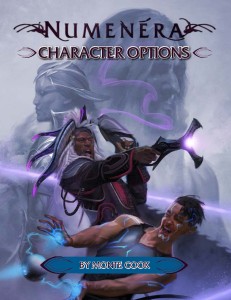 Although the games are different, their core mechanics are the same. Both rate tasks and difficulties from 1 to 10, and both have characters who use Effort, skills, and assets to reduce that difficulty, and both rely on the roll a d20 to see if those tasks come off successfully. The characters in each are described by a single sentence: I’m a blank blank who blanks (I’m a Mad paradox who Separates Mind from Body). Even many elements of the games are similar in a general sense. So although the types, creatures, cyphers, and most of the descriptors and foci are different from game to game, the form in which they are presented, and the way they fit into the game as a whole, is the same.

Which is a long way of saying you can use most of the descriptors and foci presented in Numenera Character Options in your game of The Strange. In many cases, only a few easily-made tweaks is enough to offer your players a particular focus or descriptor when they translate to a new recursion, and in some cases, even while they remain on Earth.

Most of the descriptors listed above can be used as-written when you’re creating a new character for The Strange. But a few bear additional scrutiny, and a few don’t actually work that well.

If you choose this descriptor for your character in The Strange, it would be interesting if you were exiled from another recursion of some importance, such as Ardeyn, Ruk, Crow Hollow, Atom Nocturne, or one of the GM’s creation.

Generally speaking, when you translate between recursions, you can choose to look different when you take on the context of a new recursion. This means that this descriptor doesn’t really work for The Strange, unless you are willing to appear hideous in every recursion you translate to.

Because social positions don’t generally reach between recursions, this descriptor applies only in your native recursion. When you translate to other recursions, you don’t gain the benefit of extra equipment, a retainer or mount, or a contact. However, if you interact with the people of a new recursion long enough to establish your legitimacy, you could gain their respect (or the contempt of non-nobles).

Because accumulated wealth in one world or recursion doesn’t follow you between recursions, this descriptor applies only in your native recursion. When you translate to other recursions, you don’t gain the benefit of extra equipment or connections, though you never lose your skill in dealing with monetary matters.

If you’re a character in a game of The Strange, you might prefer to take the Strange descriptor. However, you can certainly be Weird if your heart’s set on it. If you choose this descriptor, you have a distinctive physical quirk appropriate to the context of whichever recursion or world you translate to.

To use foci from Numenera Character Options in The Strange, the first step is to determine under which law each of the foci operate. We suggest the following: 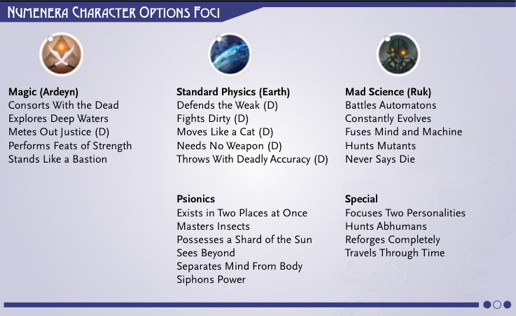 Most of the foci can be used with story-based tweaks in various recursions that operate under the associated law. However, a few require special consideration before they are used, if used at all.

This focus is reserved for a special race of creatures in Numenera called lattimors. Unless you include lattimors in your game of The Strange, there’s no need to make this focus available. However, if you have a PC who wants to play a lattimor, this focus is available in whichever recursion you’ve chosen to be the native land of lattimors (probably a Mad Science recursion, though perhaps Psionics). If you’ve created a Numenera-themed recursion, or if the Ninth World is the prime world for your game of The Strange, this focus is a natural fit.

This focus is specialized and might exist only in Numenera-themed recursions where abhumans live, or those in which the Ninth World is the prime world. However, it could be adjusted slightly so it applies to different recursions across all laws. To do that, just replace the term “abhuman” with one that refers to an alternative category of humanoids in a given recursion.

This focus is reserved for a special race of creatures in Numenera called varjellen. There’s probably no reason to offer it in your game unless you want PCs to have the option of playing varjellen. In that case, this focus is available in whichever recursion you’ve chosen to be the native land of varjellen.

The universe of normal matter and the recursions hosted around Earth are chronologically synchronized. There are no time differentials between locations. (The time slip attendant on Ardeyn’s creation was a special circumstance, one of many connected events that almost saw the Earth eaten by planetovores.) This means that going back in time in one location winds back the clock in all the other recursions, too.

On the other hand, you can decide that the characters jump to a different timeline when they move forward or backward through time, in which case anything they do while displaced affects events only on that line. (Each line is a separate instance of Earth, the Strange, and all its many recursions.) The point the PCs left becomes a nexus of many timelines. Characters returning to that point might find themselves in their original time, in which case nothing they altered in the past affects their present or future, or they might be in a different timeline, where their past actions have had a great effect on the current world. This handily avoids the issue of paradoxes (the phenomena, not the character type).

You can also use other methods for managing time travel, including allowing the characters to change past events to create a new future—damn the consequences. Or you might have the PCs merely observe, unable to interact with anything outside of the point you decide is the present.

That’s a wrap, at least in regard to a high-level look at the topic. If you’re interested in exploring the concept of converting between Numenera and The Strange (and vice versa) in even more depth, check out When Worlds Collide, which was where I cribbed a lot of the specifics above from.