A couple weeks ago I wrote how to use Numenera Character options for The Strange. I did so to illustrate how major Cypher System elements are compatible between different games, to provide The Strange players with new descriptor and foci options, and in anticipation of the release of In Translation: The Strange Character Options. Well, In Translation has now gone on sale, and I know you’ll get a lot of great use of it in your games of The Strange.

You know what’s next, right? Yep. Not only does the new book provide a bounty of new foci, descriptors, and abilities for use in The Strange; you can use the foci and descriptors in your Numenera game.

So when you describe your character in your Numenera game in the sentence, “I’m a blank blank who blanks,” your answer could become, “I’m a Slacker jack who Is Idolized by Millions,” “I’m a Paranoid glaive who Goes Berserk,” or “I’m an Introverted nano who Aspires to Be Posthuman.” You get the idea.

(In Translation also provides new abilities for the core character types of The Strange, but adapting those to Numenera glaives, nanos, and jacks isn’t as straightforward.)

Descriptors from In Translation: The Strange Character Options

Most of the descriptors listed above can be used almost as-written when you’re creating a new character for Numenera. But one or two require a little adaptation: those that provide abilities depending on translation between recursions or phenomena related to the dark energy network of the Strange.

Instead of gaining 10% more currency each time you translate into a given recursion, you gain an asset on all negotiations involving the transfer of currency. When you haggle, you usually get the upper hand.

Instead of being triggered by major phenomena related to The Strange, you are triggered by the activation or unexpected appearance of the numenera you haven’t previously encountered (as well as being subject to great physical stress).

Foci from In Translation: The Strange Character Options 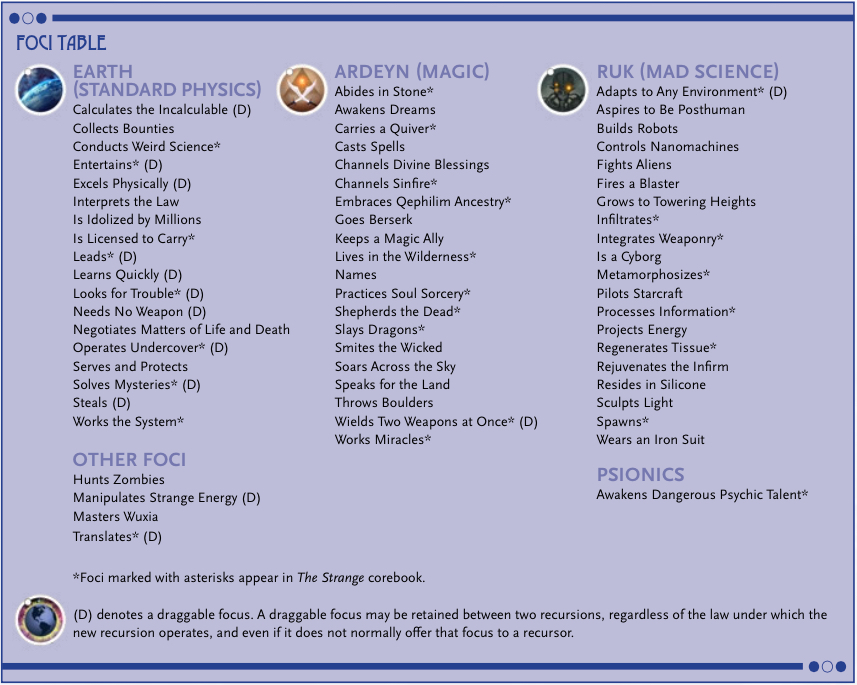 In Numenera, different laws of existence are not part of the basic game experience, which means right off the bat, you can ignore the categories segregated by law. They’re meaningless for most Numenera games. You also don’t have to worry about dragging a focus.

Most of the foci on the table can be used just fine in Numenera, though with story-based tweaks to make the given foci appropriate for the Ninth World as opposed to modern day Earth, or an explicitly fantasy, sci-fi, or superhero setting. For example, Masters Wuxia uses a real-world Earth term (wuxia), which probably isn’t appropriate for your Numenera Campaign. The simplest fix is to rename the foci; call it Masters Elemental Combat or something similar.

Similarly, Collects Bounties is a perfectly wonderful focus for Numenera, though it’s written in the vernacular of modern day Earth. Replace those with equivalents from the Ninth World;  “Trained and Licensed” is an authority vested by the Aeon Priests (not a court of justice).

Most the other foci require similar modifications, to a smaller or larger extent. I’ve provided some suggested guidance for select foci, as follows, as an example on how to proceed on your own.

This explicitly fantasy-oriented foci can still work quite well in Numenera, especially given how many natives consider the numenera to be a kind of magic, and nanos to be sorcerers. It might even be possible to keep the spellbook, as described in the foci, and explain it as a method for a unlocking nano-assisted or psychic phenomena. However, you could also replace the spellbook with a piece of the numenera, whether that be a mirror on which words appear, a hovering bead of light, a tiny automaton, or something else.

Your character might think she’s wielding a god’s power on Earth. But it could just as easily be the energy transmitted by an ancient alien, a partially-defunct artificial mind, a consciousness pushing through from a transdimensional cyst, or something else.

This focus requires that the GM be willing to provide you with a piece of the numenera that fits the bill as a “blaster,” so be sure to check with her first before taking this focus.

This focus may be a bit too particular for the Ninth World. It’s a better focus for a game where you switch foci when you take on the context of multiple different worlds, as happens in The Strange.

Is Idolized By Millions

This focus relies somewhat on the modern media, social media, and other methods whereby celebrities are made. That said, a character from one of the large cities of the Ninth World, such as from Qi, might have reached this status, in which case this would be a perfectly fine and fun focus for Numenera. However, when the character travels beyond the location of their particular fame, they may find some of their abilities are less useful, such as Perks of Stardom.

This focus is so specific to playing The Strange that it might not be worth adapting to Numenera.

This focus is essentially a reskin of Needs No Weapons as it already exists in the Numenera Character Options. (Because MMA!)

Talk with your GM about this focus if you’re really drawn to it; it’s probably far too specific for your game of Numenera, unless your GM is planning a new game direction where your characters leave the surface of the Ninth World behind, and head “into the night.”

Like Casts Spells, this focus supports a prominent fantasy esthetic. Though as above, this focus could be an alternate take on the guidance provided for Serves and Protects–an Aeon “templar” might possess abilities such as those described here.

Many more foci than those I provided guidance for conversion are available in In Translation (as shown on the table). Take a look and see if any of those are something that might be just perfect for your next Ninth World character or campaign.