Your Game: Bodies In Translation – Gear and Foci vs. Stat Pools In The Strange

In The Strange, player characters travel into limited worlds called recursions; seeded from myths, novels, movies, and comics. Each time a PC steps into a new world, their body and mind adapt so that they become part of that world in a process called translation. For example, when Katherine Manners translates from Earth to the fantasy recursion of Ardeyn, she gains a general understanding of that world and its languages, and arrives wearing appropriate clothing.

An oddity of translation is that—except for cyphers—travelers don’t take their gear with them. Instead, their gear goes into abeyance. It isn’t lost; the gear is returned to travelers the next time they come back to a previously visited recursion. Continuing the previous example, when Kate returns from Ardeyn to Earth, she doesn’t bring back the magic implements, spirit companions, or gold coins she found on Ardeyn. On the other hand, she regains all her gear from Earth: her trusty revolver, her fractal arm tattoo, her Earth clothing, as well as her expensive smart phone. 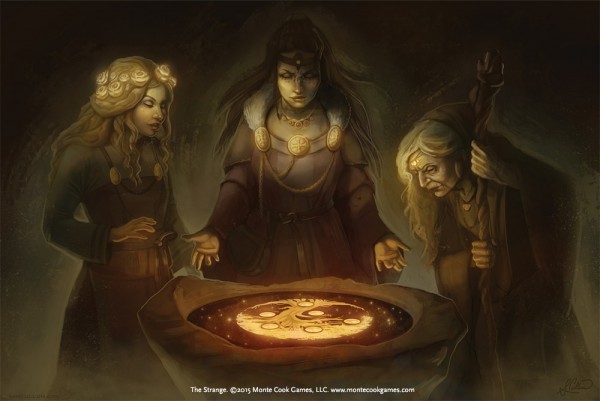 Similarly, PCs generally don’t take their foci with them in translation (though they keep their descriptor and type). Instead, PCs gain a focus appropriate to the new recursion, and lose access to the focus from the recursion they left. Which might mean that though Kate was a Lucky spinner who Solves Mysteries on Earth, in Arden, Katherine Manners is a Lucky spinner who Shepherds the Dead.

All this leads some players to ask the question: do their stat Pools—Might, Speed, and Intellect—remain in abeyance, like their gear, while they’re visiting a different recursion?

And the answer is: Nope. A PC has one set of Pools. Sometimes translation may add or subtract points from those Pools because a character’s focus changes, but generally speaking, when characters leave one recursion and enter a new one, they retain their current Pool values. Which means that if characters are injured in one recursion, even after translation into a new world, they remain injured.