When we were finishing the new Numenera books, Discovery and Destiny, one of the first things that playtesters asked us was, are you going to incorporate some of the cool new material in these books into the Cypher System?

A valid question. And it got me really thinking about the Cypher System Rulebook as a whole. I didn’t want to change the rules—I love the Cypher System, and wouldn’t touch the mechanics. But developing Numenera Discovery and Destiny showed me that there was a lot we could add in terms of player abilities and flexibility, and what the CSR really needs is more flexibility. The idea that you can create any campaign in any genre is fundamental to the whole idea. And I realized we could take some steps to push that idea a lot farther.

So next year, we’re going to be releasing a brand new, revised Cypher System Rulebook. This will be a part of the Your Best Game Ever Kickstarter that we will launch on July 24th. Your Best Game Ever is a guidebook for roleplayers of any game, full of advice and suggestions for really getting the most out of every game session.

But let’s get back to that new CSR. Before I go any further, though, let me say right now, if you’ve got the existing Cypher System Rulebook and you’re happy with it, great! These new ideas don’t change the way the rules work. You still roll a d20, you’ve still got difficulties 1–10, you’ve still got characters with descriptors, types, and foci. NPCs have levels. PCs use effort to decrease the difficulty. Everything is still fully compatible with everything Cypher-related that we’ve ever published. You’ll be able to play a game with characters from the original CSR and from the new CSR all at the table at the same time. The difference isn’t in how the game is played, but in the choices players have for creating and running their characters.

What I’m most excited about are the ways I’ve thought about over the last few years to make things more customizable so that you could even more easily use these rules in any setting. To that end, in this book we’re dramatically streamlining the chapter on character focus, so that you can customize your character’s focus to perfectly match the setting and your character concept. So if you’re making a starship pilot, a superhero, or an occult investigator, you don’t choose the one that fits best from a list of foci—you take your character concept and tailor your focus so that it really fits what you want to do.

Based on player feedback, we’re also making what we called subtle cyphers—cyphers that aren’t tied to a specific object—the default for all genres, and we’ll be including way more of them. (You’ll still be able to have cyphers as objects too.) This will make applying the concept of cyphers, which is obviously core to the system, easy no matter what kind of game you’re playing.

And of course, there’s all those new additions from Numenera Discovery and Destiny that add a lot of new options that just make the game better. They’re not really changes, they’re additions—new character abilities, more choices, player intrusions in addition to GM intrusions, and more. These will all be incorporated into the new CSR. And let me say again, it’s still all entirely compatible with existing Cypher System material, whether it be from the CSR or one of our settings like Gods of the Fall, Predation, or Unmasked (and of course, Numenera and The Strange).

Lastly, we’ll include even more genres you can use, in addition to fantasy, horror, and so on. We’re going to break science fiction into hard sci-fi and space opera/science fantasy, and we’ll add coverage for romance, historical gaming, and more! 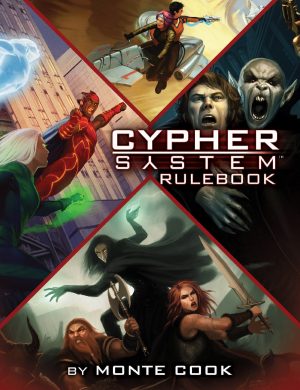 Update: Your Best Game Ever is on Kickstarter now! 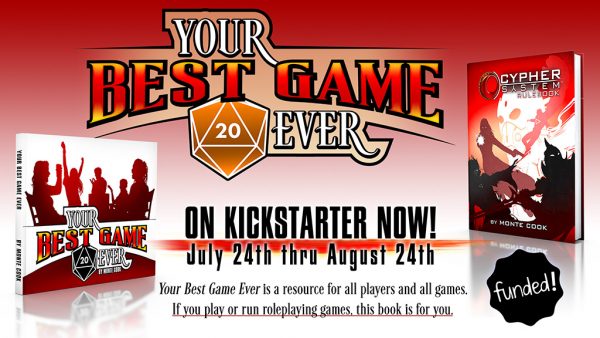 This entry was posted in Articles & News,Play Better,Your Best Game Ever. Bookmark the permalink.