How Fiona Fell From Grace: Character Arcs in Invisible Sun

Even though you are currently indoors, you feel raindrops hit your shoulder and the side of your forehead. Way in the back of the room you see a man in a beautifully tailored suit, whose head is nothing but a rolling thunderhead. He has a big bouquet of flowers…

In our Invisible Sun playtest campaign, my character Fiona’s first character arc was Fall from Grace. Obviously, falling from grace isn’t something she wanted to do. It happened because she made bad choices.

In order to complete the arc, Fiona had to:

Make an initial misstep: As a Goetic, Fiona summoned an angel to help her with a task. In exchange, she promised the angel she would build a beautiful sculpture. Fiona Revels in Beauty (her forte), so this was something she was excited about. Later, she summoned a demon to help her with a different task. In exchange, the demon wanted her to destroy the beautiful sculpture. She agreed. Because making promises to both angels and demons is always a good idea… (The angel and demon summonings were part of helping other characters with their arcs, and happened in Narrative Mode at the gaming table.)

Make things worse: Fiona built the beautiful sculpture (it was glorious) and then put off destroying it. Eventually, she feared the demon was going to attack her for failing to live up to her end of the bargain, so she planned and threw a beautiful destruction party, hoping that destroying this beautiful thing in a beautiful way would make up for what she was about to do. She invited everyone she knew, including The Eldest, a being with rolling thunder for a head, who she was starting to have feelings for. (This all happened in Development Mode side scenes with the GM, and then I made and sent out invitations to all of the other characters via our Invisible Sun chat on Slack). 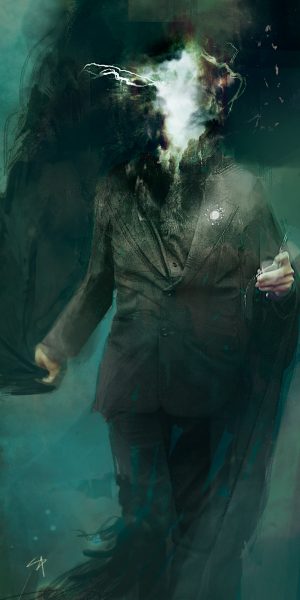 Make things even worse: The party was a beautiful success. Fiona hired a special singer, someone who had honed her magical voice as a weapon, to destroy the sculpture with a beautiful song. Everyone loved it all.

Well, not everyone. The demon and angel both came to the party.

From where you’re standing, you see off to your right a female figure. She looks like a statue made of dull onyx. She has a very wide smile.

Off to your left, you see a male figure. He’s very pale, with milky blue skin. He has large feathered wings on his back and he looks absolutely crestfallen.

The moment the sculpture was destroyed, a conflux of unknown magic created a harmful magical virus that attacked the guests (including the other PCs). It was horrible, but the worst was still to come.

Hit Rock Bottom: Fiona’s friends almost died because of something she did. The deadly magical virus might be spreading through the city she loves and lives in. And, worst of all: When The Eldest saw what Fiona’s choices had led her to, he dropped his flowers and walked away from her. Complete and utter rock bottom. (We did this all in Narrative Mode at the gaming table.)

Amid the chaos and ruin, you see the bouquet of flowers fall from The Eldest’s fingers. And then he, and the rain, are gone.

Fiona licked her wounds for a few weeks (in Development Mode side scenes) and then got a new character arc: Redemption. Now she’s trying to fix things by hunting down and eradicating the magical virus, and trying to find a way to apologize to the man with rolling thunder for a head.