Invisible Sun: All the Components for the Kickstarter Edition

This is everything you get in the Black Cube.

The Books: The box contains four beautifully, intricately presented rule and setting books, called The Key, The Gate, The Path, and The Way. These contain everything you need to get an Invisible Sun campaign started. You’ll also find them to be filled with hidden puzzles, codes, and mysteries all their own. While solving these isn’t crucial, it will enhance your experience.

Sooth Deck: A special deck of 60 round cards used to facilitate gameplay and inspire GM creativity.

Board: A durable, folding cardstock board with the Path of Suns on which the GM plays the Sooth cards.

Testament of Suns: An imposing resin sculpture that holds a Sooth card during gameplay.

Spell Cards: 300 cards detailing the spells characters will cast in the game.

Ephemera Cards: 450 cards detailing the minor magic and one-use incantations characters will use in the game.

Object of Power Cards: 200 cards describing the magical accoutrements characters will obtain and create in the game.

Tokens: More than 100 tokens of different types to use for the different kinds of player rewards, Vance spell management, and more.

Dice: 4 gorgeous 10-sided dice, marked with game-specific symbols. One is a “mundane” die, while others are special “magic” dice.

Secrets Envelope: A sealed envelope with some of the deepest secrets of the setting.

Cloth Maps: A gorgeous map of the City of Satyrine and another of the Path of Suns.

Poster Map: A two-sided map showing the Actuality and the fantastic realm of Indigo.

The Guiding Hand: A GM’s notebook that guides the GM through creating and running a campaign of their own, with ideas, suggestions, and prompts.

Player Handouts: Dozens of useful things, from quick-reference rules cards to a plethora of handouts and clue-laden props.

Character Tomes: The four orders of magic, plus the order-rejecting Apostates, each get their own unique 4-page character tome. The game contains 6 blank copies of each type of tome, ready to use to create characters.

Grimoire Pad: A pad of 30 handy sheets for players to record their spells, secrets, and more.

Bookmarks: Four special bookmarks, each tied to a different book, not only help mark important pages, but contain frequently referenced pages for important topics. And might they be a part of a larger clue to yet another mystery? Everything’s fair game.

Pregenerated Characters: Five iconic characters for the setting, ready to use as player characters.

The Box Itself: The Black Cube is a mystery box taken right from the game’s setting. This incredibly sturdy box folds in a unique design, and includes a special compartment for the books, and is cleverly organized to store and access all the many components.

Searchable Electronic Reference: Every copy of the game comes with a digital download of the rules and setting material for reading on a tablet or other screen, and the handiness of quick searches. (Exclusive to Kickstarter backers and preorder customers.)

Secrets: Are there still more mysteries hidden in there somewhere? Absolutely, for those who look carefully.

(Preorders are open for Invisible Sun! Want to know more about the game? Take a look at What Has Been Revealed So Far!) 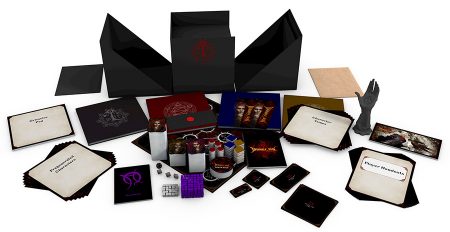