Discover Your Destiny: Your Introduction to the Ninth World

The Numenera 2 Kickstarter is giving us opportunities to support more kinds of players; players who love exploration, crafting, long-term play, and more. We’re also making it easier for players to both learn the system and get comfortable with the setting, partly from language clarifications in the corebooks, and partly in the form of a new PDF product called Discover Your Destiny.

Discover Your Desinty will come out early next year (before Numenera Discovery and Numenera Destiny), and every backer of the Numenera 2 campaign will receive a copy. It uses story to introduce players to the Ninth World, and focuses on the narrative concepts behind Numenera 2. It leads players—both new and experienced—through creating a character using some of the brand new material from Numenera Destiny and highlights some of the changes people will see in the transition from Numenera to Numenera 2.

Discover Your Destiny will serve as an introduction to the setting and the game. If you’re an old hand, it will help showcase some of the differences introduced in Numenera Discovery and Numenera Destiny, to get you ready for those products. Either way, it will come out well before the new corebooks, and get everyone excited for the goodies yet to come. 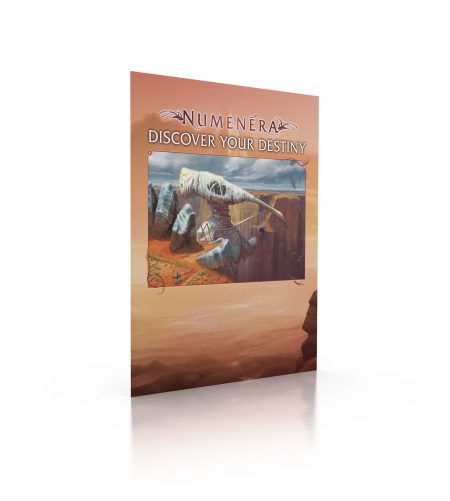 How is it different? It’s not really a game book at all. It’s two intertwined short stories. One is the story of characters in the Ninth World. True to the gameplay options of Numenera Destiny, they will deal not just with exploring their strange and dangerous world, but working and building to guide their whole community to a better situation, despite the threats that loom large. The other is a short story about a group of gamers in the real world, learning to play Numenera. While that’s a narrative that could be fairly nuts-and-bolts, we hope to incorporate a few twists to make it a compelling story in its own right.

There will be many ways to use this book:

Discover Your Destiny will be co-written by Monte Cook and Shanna Germain.