A Look at Numenera Destiny

As interested as you probably are in the kinds of changes we’re planning for Numenera Discovery (we offer some of those answers here), it’s possible that Numenera Destiny is something you’re even more keen to learn about. So let’s talk about Destiny! 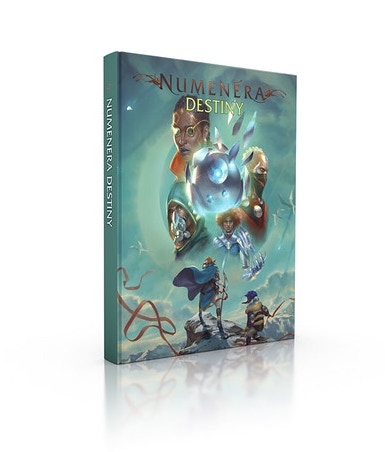 If Numenera Discovery pits humans against a dark, weird, and inscrutable world, then Numenera Destiny reveals a light on the horizon. That light is the player characters, who attempt to understand, use, and maybe even master what was previously unfathomable.

At 416 pages (the same size as Discovery), Destiny will be replete with amazing material, including a completely revised and expanded crafting system. This crafting system (which will replace the system in the current corebook) will provide specific guidance on every aspect of crafting, whether the PCs want to design and build a canoe to travel on the river, a watchtower to keep an eye out for margr, or a lightning tower to defend their new community.

Hand-in-hand with the crafting system upgrade is a robust and adventure-possibility-rich set of rules for salvaging. Destiny will instruct PCs on how take weird and broken scrap and salvage it for special components called iotum. Iotum includes material like synth, but also even rarer components like as apt clay, pliable metal, mimetic gel, thaum dust, and even the especially rare and valuable data orbs and bits of cosmic foam. None of these, of course, would be anything other than micro-treasures, if PCs were not also able to find plans of the ancients, too. Plans from a time when the prior worlds spoke to the stars, reshaped the creatures of the world, and mastered form and essence.

With plans of the numenera and iotum, PCs will have the opportunity to create all manner of items, structures, installations, artifacts, vehicles, and even automatons.

With all these new rules for crafting and creating, it should come as no surprise that Destiny also provides guidance and rules for ways PCs can establish a base or even a community of their own. Rules for how communities gain stats, and how communities can interact with each other (or with an advancing horde) are also being designed. Which, of course, means that a system for easily jumping into and out of long-term play will be provided.

All PC types can use the crafting and salvaging system, create communities, and engage in long-term play. But the three brand new types described in Destiny will speak even more fully to these subsystems. The names of these new types are already in the wild, but just to confirm, they are the Arkus (plural: Arkai), Delve, and Wright. As with any type, the new ones in Destiny will have a broad base of abilities to choose from at each tier, but these new types will have a specialty in leadership, salvaging, and crafting, respectively.

What else can you find in Numenera Destiny? A whole lot more, including more artifacts, cyphers, creatures, new areas of the setting, new adventures, and so on. If you want more details about these topics and new types, we’ll be previewing some specific examples later in the Kickstarter campaign, and the playtester backers will have access to a whole lot more.